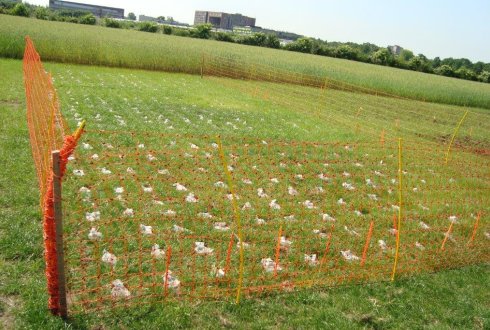 Manure, there's far more to it than just a smell. On the 3rd of April, Ghulam Mustafa Shah successfully defended his PhD thesis “Strategies to reduce losses and improve utilization of nitrogen from solid cattle manure”. His work gives new and useful insights for reducing nitrogen pollution and nutrient losses from solid manure.

Mustafa was awarded a scholarship in 2007 after finishing his Masters at the University of Agriculture in Faisalabad, Pakistan. This scholarship aimed at a PhD position at Wageningen University. He successfully did so and started at our group in 2008 looking at factors controlling nitrogen losses from solid cattle manure during storage and after field application. Another main focus in his work was on finding strategies to reduce these losses and improve uptake of nitrogen by the crop, thereby improving on-farm N cycling (1). A very relevant subject in both the 'North' and the 'South' for similar reasons, but with a different focus. In Europe, with generally high inputs of nutrients, the excessive emissions of nitrogen cause severe environmental problems. This is also relevant in southern countries like Pakistan, where the use of animal manure as fertiliser source is increasing in response to the (i) low availability and increasing price of chemical fertilisers, and (ii) increasing trend towards organic farming.

Mustafa's work gives some interesting new insights in these processes and solutions for the problems they cause. He found that covering the manure with an impermeable sheet was the best way of several alternatives to store the solid manure (fig. 2). Only 6% of the total initial nitrogen was lost during storage when using this method, of which 4% probably as harmless N2. Another main finding was that the combination of irrigation and the addition of Lava meal to the manure before application resulted in a reduction of the harmful NH3 by almost 100%. With temperatures between 40 and 50 ºC in summertime, nitrogen will disappear faster than in The Netherlands, but processes are similar. His main findings therefore have good practical use for farming systems in both Europe and countries like Pakistan. The problems he tackles are relevant for all farming systems using solid manure, either organic or conventional farming systems, these findings therefore have a broad application in the agricultural sector.

For four years Mustafa has been cheerfully present at our department, doing experiments on the experimental organic farm Droevendaal and working on his thesis. This resulted in three articles as first author in peer reviewed journals with two more in the pipeline, and several co-authored scientific publications and presentations of his work at international conferences - you can find a list of these publications on his profile through the link on this page. After his defense, he will return to Pakistan where he is applying for a job as an “Assistant Professor”. He enjoyed his stay in Wageningen, but is also looking forward to start working in Pakistan and to the steady 40º C (!) in summertime he says.

(1) Nitrogen in the manure is present both in organic and inorganic forms. The latter include ammonium (NH4) and Nitrate (NO3). Application of animal manures to cropland is important for recycling of nutrient elements and for sequestration of carbon in soil, but may cause agro-environmental problems when losses occur due to inefficient utilisation under poor management. Of particular importance are ammonia (NH3), nitrous oxides (N2O), dinitrogen (N2) methane (CH4) and carbon dioxide (CO2) emissions to the atmosphere and N leaching to surface and ground waters. These emission arise from biological, chemical and physical processes involved in degradation of manure immediately after its excretion in the barn, during storage, and after field application. Leaching of N deteriorates water quality and cause eutrophication. Potential consequences associated with NH3 emissions include (i) loss of biodiversity, (ii) acidification and eutrophication of ecosystems and (iii) respiratory diseases for human. The N2O and Ch4 contribute to global warming, whereas N2 is a harmless gas.

To watch the defense online in replay, just follow this link.