Tree frogs are versatile climbers that use their adhesive digital pads to attach to various substrates, even under challenging conditions. The pads are covered in mucus and can generate adhesive and frictional forces of up to several body weights per digit. For centuries, the remarkable attachment performance of tree frogs has fascinated scientists who aimed to unravel the fundamentals of tree frog attachment. Among the various mechanisms that have been discussed to explain tree frog attachment, capillary adhesion is the most commonly used one. Previous research was primarily directed at the role of the micropatterned pad surface in attachment, which resulted in the development of several tree-frog-inspired micropatterned adhesives. However, a comprehensive explanation of the mechanisms of tree frog attachment is still unavailable, and the role of internal pad structures in attachment is barely understood.
In this thesis, I present an interdisciplinary analysis of the attachment apparatus of tree frogs with focus on subepidermal structures, hence contributing to the understanding of nature’s adhesive systems, and providing input for the design of biomimetic adhesives inspired by tree frogs.

In Chapter 3, we combined histochemistry and synchrotron micro-computertomography to characterise the internal morphology of the digital pads of the tree frog
Hyla cinerea in 3D, with a focus on mechanical links between the adhesive pad surface and the internal digital skeleton. The ventral pad surface connects to the skeleton via several pathways of force transmission. A collagenous septum runs from the ventral cutis to the tip of the distal phalanx and compartmentalises the subcutaneous pad volume into a distal lymph space and a proximal space filled with mucus glands. Moreover, a collagen layer runs from the ventral cutis via interphalangeal ligaments to the middle phalanx. The fibres constituting this layer run in trajectories curved around the transverse pad-axis and form laterally separated ridges below the gland space. Using finite element analysis and numerical optimisation of a shear-loaded pad model, we show that the collagen fibres are presumably oriented along the trajectories of the maximum principal stresses, and the optimisation also results in ridge-formation, suggesting that the collagen layer is adapted towards a high stiffness during shear loading. Finally, immunohistochemical staining reveals the presence of several units of smooth muscle fibres in frog pads. These active structures may provide tree frogs with the ability to control the distribution of mechanical stresses across the ventral
pad surface, hence facilitating modulation of the attachment strength.

Chapter 4 addresses the morphology of the digital mucus glands and the chemistry of the secreted mucus. In H. cinerea, the mucus glands opening to the ventral pad surface form a macrogland and thus differ significantly in their morphology from the ones opening to the dorsal (non-adhesive) pad surface. We identified a digital mucus macrogland in min. 10 neobatrachian families that are not exclusively arboreal, indicating that the macrogland morphology is determined by generic functional requirements arising from ‘ground contact’ (e.g. lubrication and compensation of mucus loss) as well as by specific requirements for climbing and attachment. Using cryohistochemistry as well as infrared and sum frequency generation spectroscopy, we show that—in contrast to the gland morphology—the general mucus chemistry varies only little between different body locations in the tree frogs H. cinerea and Osteopilus septentrionalis, as well as between arboreal and non-arboreal (Pyxicephalus adspersus and Ceratophrys cranwelli) frog species. This observation suggests conservation of the mucus chemistry in the course of anuran evolution and does not support a specialisation of the mucus towards attachment.

Finally, I put in Chapter 6 the findings of this thesis in a wider scientific context. By integrating the outcomes of the review on tree frog attachment with the results of the experimental chapters and with insights obtained on tree-frog-inspired adhesives, I discuss the importance of the previously proposed mechanisms of tree frog attachment. I conclude that suction and mechanical interlocking are negligible. A contribution of hydrodynamic adhesion cannot be excluded, but seems to be a consequence of having a wet skin rather than a primary attachment mechanism. Whereas capillary adhesion was previously mentioned as primary adhesion mechanism, an integration of the available knowledge suggests that capillary adhesion acts together with van der Waals forces, with the latter as dominant attachment mechanism. To explore the hypothesised convergent evolution of the digital pads of tree frogs, I provide an account of what is known from this thesis and earlier works on the phylogeny of the adhesive pads. Overall, several morphological features (e.g. the micropatterned pad surface and the digital gland cluster) are widely distributed over anuran families, suggesting that the whole pad is a functional unit and raising the question if the pads evolved convergently or if they are derived from a common ancestor. In agreement with the antecedent sections, a tentative discussion of the evolutionary history of frog pads emphasises the importance of drainage, friction generation, and van der Waals forces in tree frog attachment. Based on the outcomes of this thesis, I provide suggestions for the design of tree-frog-inspired adhesives. The drainage-capabilities of frog pads render these a good model for the development of technical adhesives in a wet environment. Further promising trends are the design of fibre-reinforced micropatterned adhesives for heavy duty applications, and the creation of actuated adhesives with controllable adhesion inspired by the muscular structures found in the biological model. Finally, I present an outlook on how the field of tree frog attachment may develop in the coming years. 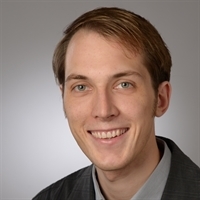