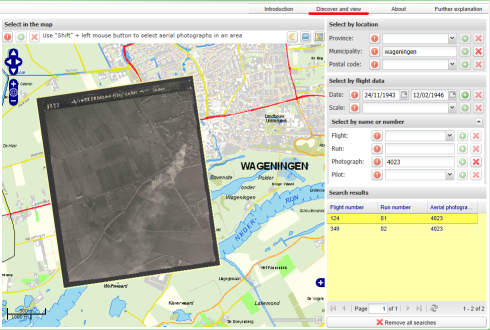 Wageningen UR Library launches a new service: Wageningen UR GeoPortal: RAF aerial photographs. The RAF Aerial Photograph collection, a unique war relict, was georeferenced and positioned on the map of the Netherlands. The photographs are now accessible via a webportal.

There are 94.250 photographs, from the period 1943-1947. You can zoom in to such a level of detail that individual buildings and streets can be recognized properly, because of the high quality of the original photos. The photos were taken by RAF pilots who flew in Mosquito airplanes.

What can you see on the aerial photographs? During World War II the Netherlands were occupied by Nazi Germany. The photos show traces of:

The photos can also be used for other purposes: studying changes of topographical features and land use in the 20th century and discovering archaeological and historic traces in the Dutch landscape over a long period of time.

The program is still in its beta version. We hope to receive comments from you to improve the system. Please contact us for your remarks.