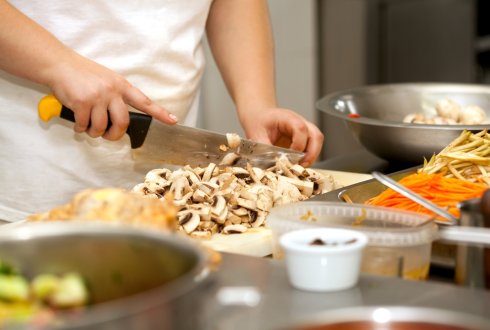 In Veghel, NL, a magical transformation is taking place: from food residues such as overripe tomatoes, waste meat, vegetables and fruits, De Verspillingsfabriek (The Waste Factory) are producing soups, sauces and meal components bursting with colour, flavour and passion. Bob Hutten, director of Hutten Catering, is the creator of the initiative, together with experts from Wageningen Food & Biobased Research.

“In De Verspillingsfabriek we process the scraps of fruit, vegetables and meat that remain in processing plants after preparation, or that remain unsold in the supermarkets. If we look at tomatoes and onions that are slightly damaged or have torn packaging, we see high-quality vegetables that have just become a bit overripe, which improves their taste. We use these for products such as tomato soup, or chilli con carne - products available in the supermarket via our brand, Barstensvol, or under private labels.

The idea for the Waste Factory arose during the Food2Food project (2012-2015), in which, together with Wageningen Food & Biobased Research and the Dutch supermarket chain PLUS, we inventoried food loss in supermarkets. We discovered that food waste residues could be repurposed for human consumption into tasty soups and sauces. Businesses and consumers responded so enthusiastically to the first products that we decided to apply the concept on a larger scale.

Along with the Wageningen researchers, we developed a logistics, food- safety and marketing plan for De Verspillingsfabriek, and then brought interested parties together. With a recognised authority in this field as a partner, a project is seen as more independent and objective and it becomes easier to convince other parties to join in. At Wageningen Food & Biobased Research they know exactly how to bring differing goals, wishes and processes together into concrete plans. They make an art of respecting every partner for their skills and the added value they bring, while keeping the energy in the project high.

The Waste Factory has been operational since early 2016 and is a great success. At the moment we can process 50 tonnes of waste streams per year and are developing products for several third parties - retailers, food service companies and manufacturers. Over time, in addition to vegetables, we will also process residues from milk, cheese, fruit and meat.

I’m very happy to say that De Verspillingsfabriek has caused quite a stir in the ‘world’ of food waste: in the Netherlands alone, an annual five billion euros of food is wasted, so there is plenty of work to do."

Go back to the overview page

Value creation from side streams