Wageningen Marine Research is an expert in aerial surveys of harbour porpoises. These surveys are conducted to make abundance estimates of the harbour porpoise population in the Dutch North Sea. The data of these surveys are used to determine the effects of the construction of wind farms, industrial developments or other projects.

Wageningen Marine Research has experience in aerial surveys of harbour porpoises. Aerial surveys are conducted with a high-winged, double-engined airplane with bubble windows, ensuring the two observers have a good view of the area below the plane. A third person enters the collected data on marine mammal sightings and environmental conditions in real time.

The plane flies at a fixed altitude of 600 ft (183 m). Surveys are conducted with a seastate of 3 Beaufort or less. Surveys are conducted using line transect distance sampling methods along pre-designed track lines allowing a representative coverage of the study area. To compensate for missed animals perpendicular distances to observed animals are measured and the so-called racetrack method is used. This means that the airplane circles back once an observation is made to determine if the animal is seen again.

Data from aerial surveys are used for abundance estimates on the Dutch Continental Shelf, and – on a smaller scale- to assess effects of for instance offshore wind farms, construction activities in harbours or other anthropogenic activities. Compared to ship-based surveys, aerial surveys have the advantage that porpoises cannot avoid the survey vessel before they are detected. Elusive harbour porpoises are easier to detect from the air than from a ship. Finally, in the same survey time an airplane can cover larger areas than a ship. 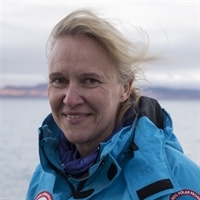