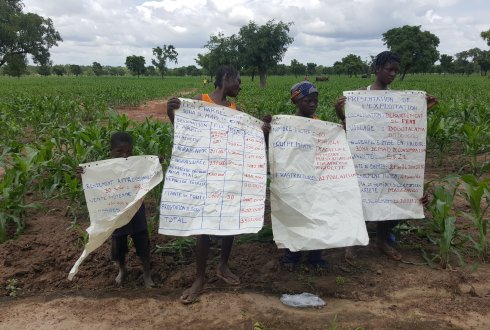 In 2015, AgriCord and Wageningen University & Research launched the ESFIM (Empowering Smallholder Farmers in Markets) Research Support Fund. Between 2015 and 2018, no less than 15 studies were carried out by 13 farmers' organisations in 11 countries on 4 continents. From Burkina Faso to Bolivia and from carp to coffee, ESFIM was able to provide support to farmers' organisations and cooperatives through collaborative action research. The common denominator of all the research projects was a focus on strengthening the position of farmers (and particularly smallholder farmers) by resolving market bottlenecks.

Many middle and low-income countries pursue policies aimed at developing agriculture, and particularly the position of small farmers. However, the organisations that represent these farmers are often insufficiently involved in policymaking and lack the information and capacity to proactively and successfully support their members. As a result, these agricultural policies often have little positive impact on the position of small farmers.

Farmers at the helm

ESFIM financed the further elaboration and concrete implementation of fifteen selected projects. The farmers' organisation sought out a local research organisation with knowledge and experience of the issue and the context. Each project received theme-specific and methodological coaching from 'northern researchers', the majority of whom were from Wageningen University & Research. The result was a triangular collaboration between the farmers' organisation, the local researcher and a WUR researcher who provided advice from a distance. Wageningen Economic Research was responsible for managing the projects.

All the studies produced highly relevant information for the policymakers, the farmers' organisations and the farmers themselves. According to one of the participants, the greatest added value was provided by the 'black box' of information that was opened: the thorough research and the analysis of the results brought to light important insights, both into the bottlenecks to market access for small farmers and the potential roles of farmers' organisations.

ESFIM taught the farmers' organisations how to identify their wishes and needs, how to cooperate with research organisations, how to translate research findings into policy, and how to improve the support to their members in order to achieve the desired changes. In short, the ESFIM Research Support Fund really helped to strengthen the position of small farmers, in particular through research and analysis.

In Bolivia, farmers' organisations pay a sales tax, but they do not receive invoices from their suppliers. ESFIM contributed to research that analysed the existing tax system and developed new initiatives to reduce the tax burden of farmers' organisations in order to improve their economic position in relation to competing traders. The plans were based on an empirical analysis and the advice of experts in tax law and the implementation of tax regulations. These plans now form the basis for negotiations with the government and President Morales.

Opportunities for women in carp farming

In Nepal, the women's cooperative Sundardeep and the Agriculture and Forestry University (AFU) joined forces to conduct a thorough supply chain and market analysis of the carp farming sector. Fish farming is one of the fastest growing sectors in Nepal, but comprehensive and reliable information about the supply chain, from production to consumption, was lacking.

Sundardeep, which only works with and for female fish farmers, specifically wanted to gain more insight into the position of women in the supply chain so it could improve that position. The research revealed where the women's position was weakest and provided pointers to Sundardeep for improving their support to the women. For example, there are important competitive advantages to be gained through the development of technical skills, particularly in the management of fish hatcheries and nurseries. The research also revealed an urgent need for a strategy to improve the sector's resilience to natural disasters.

Young people in the coffee sector

NUCAFE represents the interests of coffee farmers in Uganda and strengthens farmers by supporting and facilitating social development and farm improvements. Despite the high rate of youth unemployment (64%), the sector has difficulty getting young people interested in coffee farming. Young people in rural areas are keen to build their own income as independent entrepreneurs, but the coffee sector offers them too few opportunities. It is difficult for them to obtain credit because they do not have their own land to invest in, there is no solid vocational training in coffee farming, and it is also difficult to gain membership of a farmers' organisation. This is why many young people move to the city, where unemployment and other challenges await them. NUCAFE's research generated useful insights and the organisation provides concrete support to actively get young people involved in the coffee sector. For example, there are currently talks with a bank to give young people access to credit, NUCAFE is building a training centre, and they are lobbying to establish an alternative system of land rights.

ESFIM is part of the Farmers Fighting Poverty programme run by AgriCord and its members (the agri-agencies), and is financed by the Dutch government.