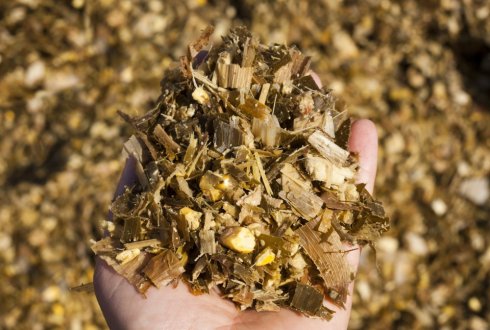 From the moment of ensiling, the percentages of rumen undegradable starch (%BZET) and rumen undegradable protein (%BRE) decrease gradually, whereas the content of fermentable organic matter (FOS) increases. The amount of rumen degradable starch in maize silage increases during the conservation process, and this may increase the risk of rumen acidosis when the silage is fed to the cows several months after ensiling. It may then be useful to set a maximum value for the amount of sugars and degradable starch in the ration, says Johan De Boever of ILVO, especially on farms where large amounts of maize silage are fed.

Shortly after ensiling, the maize silage still contains a lot of BZET, and this may overload the digestive capacity of the small intestine. In diets rich of maize, adding an amylase to the ration can help to prevent this problem.

The %BZET and %BRE of a maize silage depend on the genotype of the maize (flint or dent endosperm), the maturity of the maize (dry matter content) at harvest, the chopping length, and the storage time in the silo, De Boever explains.

At the ILVO institute, the effect of silage period on the degradability of starch and protein was investigated. Six maize genotypes, harvested at two stages of maturity, were ensiled for various periods of time. The study revealed that %BZET and %BRE had significantly decreased after six months in the silo, and that the decline was stronger in dry silages. De Boever processed the data from this experiment and other studies with a two-phase linear model, and found that a plateau value of 17.4 %BZET was reached after eleven months, compared to 30 to 37 %BZET at the time of ensiling for maize with 32 and 44% DM, respectively.

Based on analyses of almost 2.500 maize silages during the last 5 years from Eurofins, CVB has adjusted the dry matter classifications of maize silages in the CVB Table. The new data have also been incorporated in the Feeding Value Calculator. This Calculator can be used to predict silage characteristics (BZET, BRE, FOS, DVE en OEB) from dry matter content and days of ensiling. The new insights in the changes in %BZET and %BRE in ensiled maize affect ileal digestible protein (DVE) and the rumen degradable protein balance (OEB) only to a small extent.