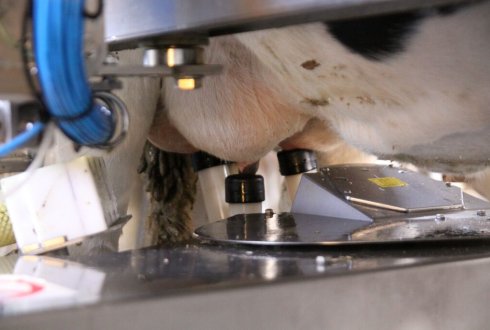 Fluctuations in milk yield measured by milking robots can be used to breed cows that can cope well with problems. Cows with less fluctuations are healthier, more resilient and live longer.

Researchers of Wageningen University & Research and CRV discovered that there are genetic differences between cows in the variability of their milk yield. This discovery was done based on daily milk yield records of almost 200,000 cows. “The milk yield of some cows fluctuates much from day to day, whereas the milk yield of other cows remains stable,” tells researcher Marieke Poppe, researcher at Wageningen Livestock Research. “We noticed that cows with a genetic merit for stable milk yield often had a genetic merit for good udder health and few metabolic problems, such as ketosis. Cows with a stable milk yield also tended to live longer.” Because there are genetic differences between cows, it is possible to breed for less fluctuations in milk yield. Poppe adds: “Daily milk yield records could thus help to breed cows that can handle problems better; cows that are more resilient.”

Breeding for resilient and trouble-free cows

Further research will focus on the additional value of this new trait compared to existing traits currently used in breeding, such as udder health and longevity. The additional value may be that this trait grasps better how much cows react to stressors and how quickly they recover. If there is indeed an additional value, breeding values for fluctuations in milk yield can be estimated. This would allow farmers in the future to breed trouble-free cows even better.

The research was conducted by researchers from Wageningen University & Research and CRV. CRV trades in genetic material (such as semen from a breeding bull). Read the full article in Journal of Dairy Science for more information.