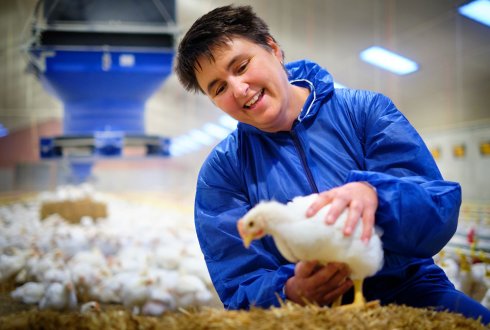 Wageningen Livestock Research, part of Wageningen University & Research, is developing a system that automatically analyzes and interprets broiler behavior. The system should provide poultry farmers with simple and affordable support in preventing leg problems with broilers and enhancing animal welfare.

Dr. Ingrid de Jong is receiving 500,000 dollars (442,000 euros) for this research from the SMART Broiler Initiative. Thanks to support from Plukon Food Group, CLK GmbH and Utrecht University, the project budget amounts to a total of 610,000 dollars (538,000 euros). The Swedish Lantbruk University and the American Virginia Tech are also partners in this project.

Broiler chickens are prone to leg problems. This affects animal welfare and production. Current methods for assessing broiler chicken welfare on-farm rely on human observation. This is subjective, labor intensive and can lead to delayed intervention.

Dr. Ingrid de Jong: “We are researching whether we can continuously monitor and interpret the behavior of broiler chickens with 3D infrared cameras. And of course, if we’ll be able to automatically alert the farmer where necessary. Filming animals is easy. Developing a system that analyzes those images; that’s the challenge. Especially if you want to monitor animal behavior in large groups. How do the chicks run, walk and play? How do they treat each other and their environment?”

The ultimate goal is a simple and affordable system that supports poultry farmers in enhancing animal welfare on their farm. For example, because they receive a signal when problems (threaten to) arise in a group of broilers. This allows them to intervene at an early stage.

Dr. De Jong: “Large, expensive and complicated systems are often set up for these projects. A lot of energy is subsequently put in compressing these systems to make them applicable. For us, the simplicity and affordability of the system is the precondition. So we start exactly the other way around.”

SMART Broiler is developing automated Sensors, Monitoring, Analysis and Reporting Technologies (SMART) to objectively and comprehensively assess broiler welfare worldwide. These tools have the potential to enhance welfare for billion birds annually worldwide. SMART Broiler is an initiative of The Foundation for Food and Agriculture Research (FFAR) and McDonald's. The initiative consists of two phases. Phase 1 provides funds (approximately 2 million dollars) for technology development and testing. Phase 2 refines and validates the most promising techniques from phase 1. The funds for this phase will likely be awarded in late 2021.