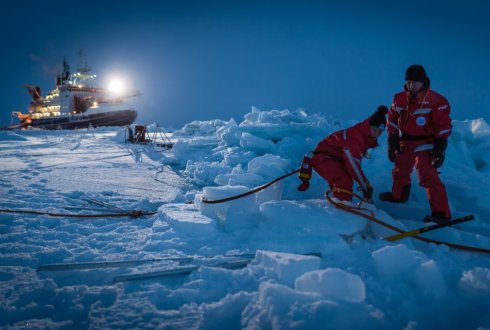 The first leg of the MOSAiC expedition was completed in the middle of December 2019. Crew members and scientist of the second leg are on board now and working hard to continue the work after celebrating Christmas and New Year’s eve on board together. Leg 2 is the darkest and coldest one of them all.

ICEFLUX colleague currently on board

On board is AWI (Alfred Wegener Institute) colleague Giulia Castellani. As a physicist, she has been working in the joint Wageningen Marine Research and AWI ICEFLUX projects for many years. In these projects she has been investigating the properties of sea ice in the polar oceans and the link of these properties with the in-ice and under-ice ecosystems. During previous Polarstern expeditions AWI and Wageningen Marine Research conducted together (including last year’s Antarctic expedition PS117, Castellani collected data on sea-ice properties using sensors on both the ice and on the SUIT (Surface and Under Ice Trawl). She also worked as a biologist, processing the catch collected using various types of fishing gear. These skills will come in handy as she is currently working on collecting zooplankton and fish samples in the Arctic region during the second leg of the MOSAiC expedition.

The participants of leg 2 of the MOSAiC expedition arrived at Polarstern on board the Russian Icebreaker Captain Dranitsyn. Since their arrival, the working schedule has been very busy. The cold conditions do not make the work very easy. “It is not easy to keep your hands warm. Gloves stiffen up as soon as we step outside”, says Castellani. To protect it from freezing, sampling gear has to be insulated before going into the water and when coming out. The temperatures often fall below -30°C. Due to the cold, the holes through which different gears are deployed freeze up. These means that they have to be opened up again before the work can start. Despite these hardships the people stay positive. 'Experiencing Arctic winter is simply amazing and we all enjoy the work', says Castellani.

Apart from the temperatures there are many challenges the people on board face. Many of these challenges were already encountered during the first leg. The sea ice was thin, highly dynamic and constantly in motion. This caused both the formation of cracks as well as the formation of ice stacks due to ice floes pressing against each other. These are dangerous for the instruments on the ice, which can be covered with ice or lost. Especially cracks can also be very dangerous for the people working on the ice. In addition, the ice camp was visited by polar bears several times. Such situations sometimes make it necessary to evacuate the ice camp for short periods of time or make it impossible to go out. For most of the people on board Polarstern these challenges are not new, as the ship has been visiting the polar regions for years. Protocols are in place so that everyone’s safety is ensured. They do, however, delay the work. Castellani: “Sometimes we are on stand-by for a couple of hours before we can start the work”.

During leg 1, the team also encountered a massive storm which, although impeding a lot of the work and causing damage to the ice camp, was seen as a great and unique opportunity to investigate the effect of storms on the Arctic climate system. During leg 2, no polar bears visited the ice camp so far, but there have been many visits from a polar fox who likes to taste power cables.

The ship and the ice camp already drifted approximately 200 kilometres towards the north pole. Castellani and colleagues have been working with different types of nets to collect zooplankton samples that can give an idea of their abundance and distribution. This information is necessary to fully understand the life cycle of different species and their contribution to the carbon cycle of the Arctic Ocean. This sampling is a continuation of the work initiated by the team during leg 1, who did a great effort of setting everything up and collecting the first samples.

In addition to abundance and distribution, zooplankton species are sampled for different projects aiming to study their biology. This means that the people on board are also collecting many samples for researchers at home. “The complete sampling programme is very extensive and sometimes needs adjustments considering the challenges we are facing”, explains Castellani. Not only zooplankton was collected during leg 1, but also fishes were caught with gear used in the ice camp. These fishes will be used for several projects including the Dutch Research Council (NWO) project on the role of sea ice in the life cycle of polar cod, which is carried out by Wageningen Marine Research.

Another project in which Wageningen Marine Reserach is involved is EFICA, an EU-funded project aiming to investigate the presence, size and role of fish stocks underneath the sea ice of the central Arctic Ocean. For this project, data on fish distribution will be collected using echo-sounders and a special camera, in addition to the fishing efforts.