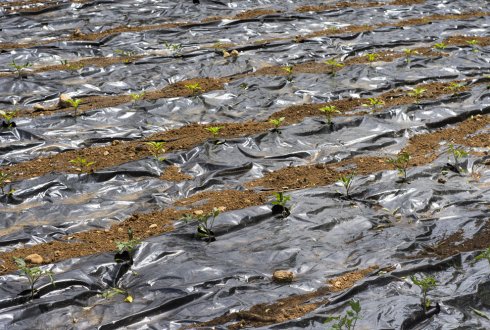 The current increase in food demand combined with the decrease of arable land puts pressure on agriculture to improve production yields. Agriculture films and more particularly mulching films serve this purpose since they allow weed suppression, reduce moisture loss from the soil, increase soil temperature and provide protection against erosion. These combined advantages lead to a reduced necessity of chemical weed control, a reduction of water consumption as well as faster crop development, thus answering societal and farmer needs.

The major drawback, however, of most current commercial agriculture films are the problems associated with their disposal. Non-degradable polymers (such as the commonly used polyethylene), tend to accumulate as plastic waste, creating a serious problem of plastic waste management. Therefore concerns about pollution associated with the use of non-renewable and non-degradable materials combined with changing regulation, call for green material alternatives in the field of agricultural films.

Biobased and biodegradable mulching films are already known and commercially available. However, both their performances, which are still to be improved, and their too high price are hampering their adoption. The project's objective is to develop a sprayable mulch formulation to be used for weed control and acceleration of plant growth. This liquid formulation should be able to form a polymer network that is impenetrable for weeds but permeable for moisture and is biodegradable with time in/on soil following EU standards currently under development.

A number of biopolymer mixtures has been tested with the aim of obtaining sufficient film-forming performance, sufficient water-resistance, sufficient mechanical resistance to perforation by growing weeds, and an acceptable cost price. Biopolymers used for the formulation of the test materials included lignin and modified lignin, modified starch and medium chain length polyhydroxyalkanoate, which was minimally processed after fermentation with a view to cost price reduction. Film forming properties could be obtained and films were formed on model substrates as well as test soils. However, within the time span of the project, films with sufficient strength and water resistance were not yet obtained. It turned out that significant more research is needed in order to develop sufficiently performing films at an economically feasible cost price. In order to avoid transport of large volumes of sprayable dispersion (latex) from the factory to the farm (in view of transportation costs, CO2 and other emissions), the final formulation should preferably be transportable in dry or very concentrated form and reconsituted to a sprayable dispersion only on the farm. Also this is a not-yet-resolved challenge. One of the contributing companies started an effort to develop the concept beyond the results obtained in the project.