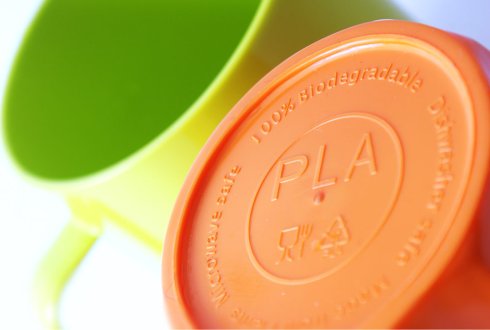 With the development of a bulk polymerization process for the production of PLA, cheaper PLA grades have become available. These affordable PLA grades are gradually introduced into the market mainly in packaging applications. Main markets for PLA is currently thermoforming for rigid food packaging applications and fibres. In order to expand potential applications increasing efforts are reported to overcome the inherent brittleness, poor melt strength, low heat deflection temperature (HDT) and narrow processing window.

Major steps have been taking to increase the HDT. However the inherent brittleness of PLA is still one of the main bottlenecks in many applications. Reported routes to improve impact properties of PLA include copolymerization, polymer blending and the use of additives (including plasticisers). Main drawbacks of the routes are the loss of transparency, the used compounds are petroleum based and relatively costly. In this project, the goal is to increase the toughness of PLA with dimer fatty acids or derivatives thereof. Two approaches will be evaluated.

The first approach will focus on block copolymers of PLA with a flexible middle block based upon dimer fatty acids (or derivatives. This approach is partly similar to the process to make High Impact PolyStyrene (HIPS).

In the second approach, a reactive extrusion process will lead to cross linked dimer fatty acid particles in the PLA matrix. Ultimately, combination of block copolymers with the dynamic vulcanization process will lead to cross linked rubber particles with optimal particle sizes for toughening PLA. Increasing the impact resistance by this innovative reactive extrusion process called dynamic vulcanization, is from industrial and societal point of view interesting because it can significantly widen the application areas of PLA; one of the best prized biobased an biodegradable plastic currently on the market. Moreover, the technology foreseen can be scaled up easily and no new machinery needs to be developed.

From scientific point of view, reduction of the particle size by this technology is highly challenging. Reduction of the particle size will be of main importance and for that, a detailed study of the extruder design in incorporated in this proposal. The block copolymers can also act as surfactant resulting in smaller rubber particles. For reason of comparison in performance, commercially available impact modifiers will be evaluated and compared to the impact properties of the newly developed PLA grade.