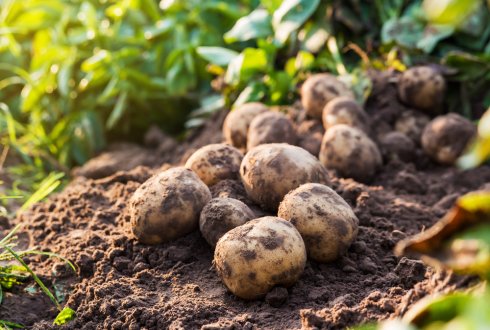 Research on potato disease resistance towards obligate biotrophic pathogens like Synchytrium endobioticum, is impaired by limitations of available disease assays. The lack of pure pathogen isolates and variation in tuber quality cause irrepressible variability among years and test locations. In this project we will design and deploy novel tools for S. endobioticum resistance breeding; similar approaches could also be effective for other biotrophic potato pathogens.

Effector responses, which serve as a proxy for conventional phenotyping methods, are central in our approach. Information on effector diversity is used to predict the resistance spectra of cognate resistance (R) genes. S. endobioticum genome sequencing revealed that, although only five different pathotypes are presently described in western Europe, genetic diversity was unexpectedly high. A single isolate can in fact contain multiple genotypes including mixtures of virulent and avirulent genotypes. This explained why resistance is sometimes incomplete and why new pathotypes can quickly emerge. Stacking of multiple wart R genes in new varieties is mandatory to provide full resistance to the breadth of pathogen diversity, but to do this haplotype specific markers are needed. Furthermore, to limit the number genes that need to be stacked, it is preferred to use R genes with a broad recognition spectrum. The previous project on wart disease has provided the insights and materials to now set a final frontier to wart disease.

In this project we will identify the cognate Avrs of at least three major R genes in breeding material. The availability of these Avrs allows to efficiently fine-map R genes and to distinguish resistance sources in breeding material. In addition, common features in the sequences of the Avrs will serve to identify effector signatures, which will allow us to select effectors that are conserved among and within isolates. The Solanum germplasm collection from WUR will be screened for hypersensitive responses triggered by these orphan effectors to identify their cognate broad spectrum wart R genes. Finally we expect that, having multiple effectors and their natural variation in over a hundred isolates, will help us to shed light on the function of these effectors in virulence and provide a better understanding on how S. endobioticum and pathogenic Chytridiomycota in general manipulate their hosts.