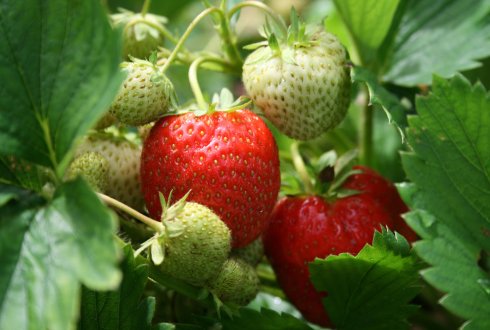 To save electricity and CO2 during strawberry production, more knowledge about the photosynthesis of greenhouse-grown strawberry plants is necessary. This was tackled by measuring light- and CO2-dependent photosynthesis responses and by conducting a literature study in which several parameters of leaf-level photosynthesis were compared.

From measurements conducted between middle of March and middle of May 2016 it was concluded that the rate of photosynthesis and electron transport was comparable between young and old leaves, while stomatal conductance in young leaves was always higher. Light- and CO- saturated photosynthesis rates were higher in older leaves. Furthermore, a decrease of photosynthesis rates was visible in April, which may have been caused by acclimation of leaf biochemistry to elevated CO concentrations in the greenhouse.

Conclusions from the literature study were that light saturation was reached at ~1000 µmol m s and that CO saturation was reached at ~1100 µmol mol. Average photosynthesis rates at these conditions were 18 and 35 µmol ms, respectively. The average quantum yield of photosynthesis was ~0.06 µmol CO µmolPAR, which is comparable to other, fast growing greenhouse crops (e.g. cucumber, tomato, sweet pepper). Large knowledge gaps about the course of photosynthesis during complete growing seasons remain.