Above ground biomass (AGB) is an indicator in tropical forests that helps to determine the quantity of carbon stored in forests to understand the global carbon cycle situation. Particularly, the peat swamp forest, a type of tropical forest ecosystems, stores a huge amount of carbon due to its waterlogged anaerobic condition which influences the formation of layers of peat that retains the carbon. But, its degradation and deforestation, caused by social and economic importance of the fruit of a main palm tree species, contributes to climate change by an increment of greenhouse gases emissions to the atmosphere.

Even by the structural complexity of these ecosystems, it has been confirmed that terrestrial laser scanning (TLS) is an efficient and non-destructive technique that produces detailed point clouds. TLS in combination with quantitative structure modelling allows the reconstruction of accurate 3D structure models of individual trees. A large number of 3D models were visually assessed to identify which Quantitative Structure Models (QSM) parameters rendered the best 3D models. Then, the volume was calculated using these models, which was multiplied by wood density (WD) to estimate AGB.

This study is pioneering in the AGB estimate from 3D QSM of two species of palms, Mauritia flexuosa and Mauritiella armata, characteristic of peat swamp forest in the Peruvian amazon. AGB of palm trees was also estimated using allometric equations to compare the outcomes with the TLS based models. Whence, the AGB from QSM volume multiplied by mean WD of palms in the tropic region of Global Wood Density Database (GWDD) in comparison with AGB from allometric equations using TLS stem height, presented higher differences in Mauritiella. However, the correlation coefficient for Mauritia was 0.692 and 0.890 for Mauritiella, due to its similar trend in AGB estimates. Simultaneously, the AGB outcomes from allometric equations could not be correlated with AGB from Goodman et al. (2013) due to the lack of Goodman values. But, visually compared the AGB outcomes showed high likeness with Goodman et al. (2013) AGB results. 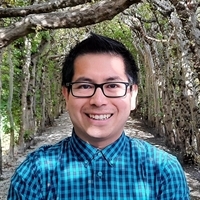