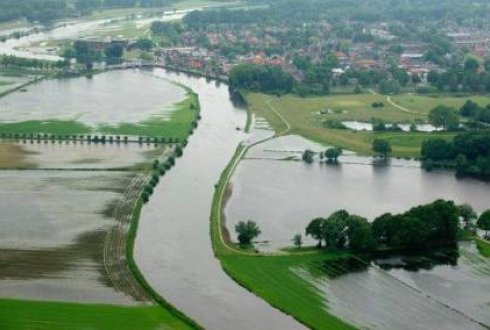 By Ruud Kampman (The Netherlands)

This study describes important terms related with floodings and evacuation for river areas and is a continuation upon two previous studies. The first previous study of Van der Biezen (2013) focused on the third layer (disaster management) of the MLS approach. The second previous study, by Zandvoort and van der Vlist (2014), was focussed on the possibilities of geodesign for flood risk management to determine exposure, in which the vulnerability was not taken into account. This resulted in a new research subject, studied in this thesis: data used in flood risk management, having as main goal to gain information about data used in the study area and a case study in which possibilities of GIS methods are tested. The thesis is focussed on the not self-reliant groups, which are positioned in hospitals and health care institutions. The report starts with a literature review about evacuation strategies and the important aspects for flood risk. Self-reliant and not self-reliant groups are described, and an overview of the self-reliant groups is presented. A selection of evacuation strategies for river areas was made, and these strategies were described in detail. After this the exposure, vulnerability and how these terms relate to risk were described, and the descriptions were related to geo-data and the geo-data used in the current situation. For this an assessment of the current situation was made by doing interviews with software developers, Safety Regions and Water boards. These interviews were compared to the literature research, to compare theory to reality. A case study was made for the area, testing the possibilities of using height data together with the road locations to find potential depressions in the roads. The outcomes of the methodology shows a good potential and with an extra parameter study, the results could be used for future spatial planning. Spatial data was used to select potential groups receiving home care and hospitals and an overview of these was made. The hospitals are close to the edges of the area which means they are close to the roads which exit the area. The groups which are potentially receiving home care can be found throughout the entire area. Overall was concluded that in case of a disaster, the evidence-based aspect of decision making will often be missing as a result of lacking geo-data standard for the water boards and safety regions.