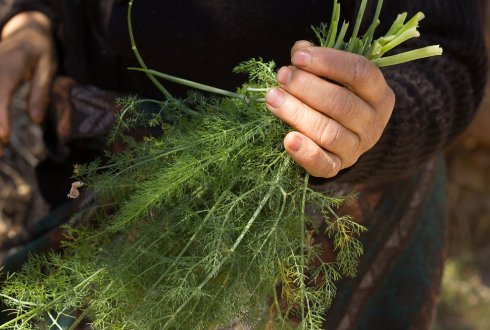 Watch and discuss “Wisdom of the Mountains”, a documentary which paints a vivid picture of the rich food and farming culture in the Pamir Mountains.

The Pamiri people in Tajikistan and Afghanistan are among the most isolated communities in the world. Tonight we screen “Wisdom of the Mountains”, a documentary (40 min.) which follows ethnobiologist Frederik van Oudenhoven on a trip through the region. The film paints a vivid picture of the rich food and farming culture of the Pamiri and explores how its ancient traditions are at odds with encroaching modern values and practices.

Frederik will introduce the documentary and share his experiences. How do the ethnobotanical insights he gained challenge conventional development paradigms and practices? Discuss together what this means for the relationship between development and biological and cultural diversity. What could be done to better reconcile values of progress, autonomy and diversity?

As an ethnobiologist, Frederik van Oudenhoven examines how knowledge and traditions, seeds, food and agricultural techniques develop from the interaction between man and landscape. He has worked with agricultural and indigenous communities in Latin America, Africa, Asia and Oceania to protect traditional food systems. From 2007 to 2010, he worked as an associate scientist with Bioversity International (IPGRI) and coordinated a project in the Pamir Mountains in Afghanistan and Tajikistan that sought to ‘revive local biocultural heritage’ by assisting communities in the ways they manage, use, and conserve agricultural biodiversity. He currently coordinates a global programme on farmer-led plant breeding with Oxfam Novib.

Together with Jamila Haider (post-doctoral researcher at the Stockholm Resilience Centre), he wrote the book ‘With our own hands, A celebration of food and life in the Pamir Mountains of Afghanistan and Tajikistan’. The book describes traditional dishes and the food and farming culture of the Pamiri people. In 2016, it received the Gourmand Award for the world’s best cookbook.

In the documentary film ‘Wisdom of the Mountains’ (directed by Daan Jongbloed), Frederik returns to the Pamir Mountains after finishing the book. He brings the book back to the farmers who shared their knowledge and foods and speaks with them about the changes they are facing: Can the Pamiri people stay true to their old traditions while adapting to a new world? In 2017, ‘Wisdom of the mountains’ won the award for best documentary at the Food Film Fest in Bergamo (Italy), and in 2019 it won the ‘Silver Shepherd’ award at the Kučevo Ethnological Film Festival in Serbia.

Humankind is seriously jeopardizing the natural world. This increasingly affects every way in which we relate to nature, as biological and cultural diversity are linked and interdependent. So what else is being lost alongside biodiversity? Ethnobotany, which studies the relationships between plants and people, sheds light on these matters by bringing together natural sciences, humanities and social sciences. And what can ethnobotany teach us about biocultural diversity conservation?