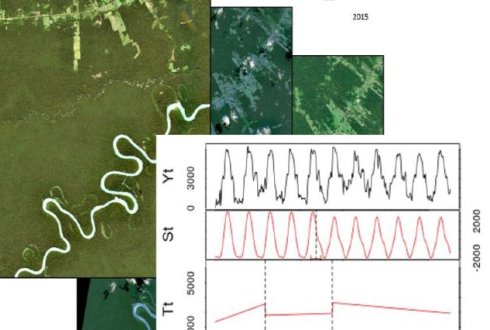 Summary
Remote sensing has provided valuable and affordable source of data for monitoring and detection of land-cover changes, and vegetation mapping over the past decade. However, monitoring deforestation in near real time remains a challenge despite satellite data becoming more accessible. The Breaks For Additive Seasonal and Trend (BFAST) is one of recent developments in time series analysis for change detection. BFAST decompose time series data into 4 components (data, trend, seasonal, and residual components) and apply different methods on the residuals to detect change. Moving Sums (MOSUMs) and Cumulative Sums (CUSUMs) are some of the methods used in BFAST to monitor deforestation. One of the challenges in using these change detection methods for near-real time is that the methods must be able to detect changes within the complete long term series while taking in account seasonal variability. Therefore, users need to have a guideline when deciding to use MOSUM or CUSUM. The aim of this study was to compare the performance and provide guidance when deciding to use MOSUMs or COSUMs for near-real time deforestation monitoring. In this study the spatial and temporal accuracy of MOSUM and CUSUM was compared. Characteristics of the time series were analysed to identify the characteristics that explains the differences in the performance of MOSUM and CUSUM. We also investigated whether MOSUM and CUSUM can be used complimentary when monitoring deforestation. The Normalized Difference Moisture Index (NDMI) from LandSat 7 and 8, for the period 2000 through 2015, was used. The NDMI was spatially normalised to minimise seasonal variability in the time series. MOSUM achieved higher spatial accuracy than CUSUM, CUSUM achieved higher temporal accuracy. The overall spatial accuracy for MOSUM was 77± 4.7% at 95% confidence level compared to 69.8±5.2% for CUSUM. The commission error for CUSUM was 30.2% whereas MOSUM had 23%. The median temporal detection delay for CUSUM was 335 days compared to 390 days for MOSUM. The differences in performance of MOSUM and CUSUM was explained by the standard deviation of the time series. To use MOSUM and CUSUM complimentary, a threshold of 0.13 standard deviation can be used to determine which method to use on particular time series. The temporal detection delay was improved to 318 days by using MOSUM and CUSUM complementary. The spatial accuracy was not improved by using MOSUM and CUSUM complementary. Users can use the standard deviation of the time series to decide which method to use for near-real time deforestation monitoring.