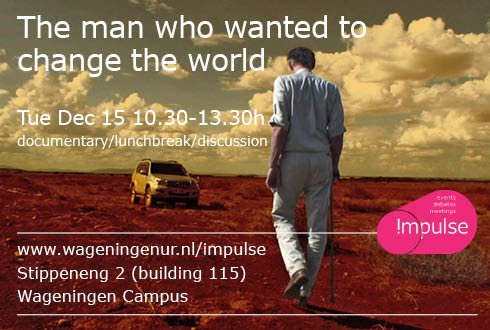 Artist Peter Westerveld claims he has come up with the solution to our climate problems. His ideas are controversial, but with the Hydrologic Corridor, a project measuring 20,000km2 of desertified land in Kenya, he aims to prove his critics wrong.

You don't need to register for this activity

The man who wanted to change the world is a character-driven documentary about artist and visionary Peter Westerveld. In the nineties he witnessed the advancing desert in Eastern Africa.
Hereafter he dedicated himself more and more to his 'landart', creating solutions for the ongoing erosion and desertification of the landscape.

In the film Peter Westerveld is working on his opus magnum, the 'Hydrologic Corridor' in Kenya. With large scale contour-trenching - digging trenches with bulldozers on contour - in strategically
chosen project locations he aims to stop erosion and make surplus rainwater go subsurface again. Thus setting in motion large scale automatic rehabilitation of natural processes. According to him, this would would result in atmosferic cooling, a more evenly distribution of rainstorms and eventually restoration of the ecosystem. This reinforcement of hydrologic corridors could be repeated, according to Peter Westerveld, until you would bring the Sahara into smaller
proportions. Ultimately, he said, this would lead to worldwide pacification of climate patterns.

The film started out with a question: can someone, an indivdual, in this day and age really change the world? Peter Westerveld had no doubt in his mind that he could. Not only that, he said it was easy. Social entrepreneur Dennis Karpes believed in him and decided to help him in his quest for a greener and cooler world. United in the Naga Foundation they set out to show the world that the climate can be managed. In Kenya there is great interest in Peter's ideas. But he thinks and
works like an artist and his approach and techniques are considered controversial in the Western world. Also the fundraising for the projects proves to be more troublesome than expected. In response to the rejections Peter dedicates himself the last six months of his life to producing artwork 'The Hydrologic Corridor'. This is a 25 meter long mobile installation representing a threedimensional display of his views on the chain reaction of energy and water. This, he thinks, will prove him right.

The film follows Peter Westerveld on his mission from 2012 onwards with a simple question in mind: will he succeed? The resulting story takes us on a journey along the fine line between madness and genius.