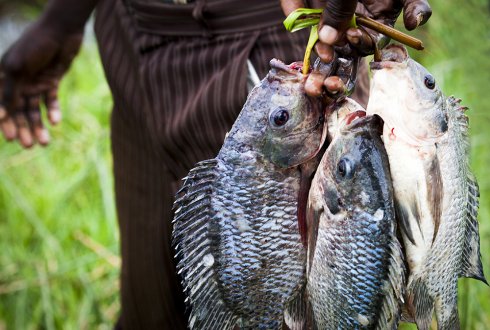 Lake Victoria (East-Africa) has undergone major changes during the last century. The main drivers of these changes are increasing nutrient loads (eutrophication), the introduction of Nile perch (Lates niloticus) and increasing fishing pressure. We studied the vulnerability of Nile perch stocks in south-east Lake Victoria for increasing eutrophication. We found that the abundance of Nile perch was more strongly driven by water quality than by the occurrence of particular prey: Nile perch will eat almost anything that is available. In addition, the food web was very dynamic and differed strongly between locations and seasons, making generalisations about the whole lake complex. Despite the continuously increasing nutrient loads the water quality in Lake Victoria appears to have improved again since the 1990s through climatic forcing. However, ongoing global warming may also cause climatic forcing to push Lake Victoria back to unfavourable environmental conditions for Nile perch survival, growth and production.