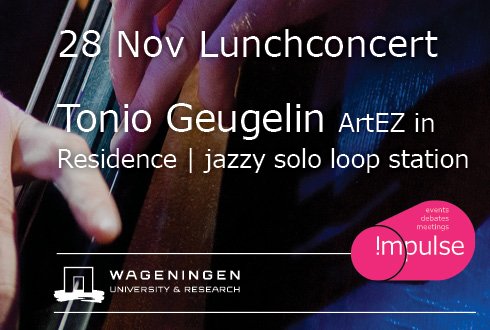 Tonio Geugelin was born in Freiburg, Germany in 1991. He began violin lessons and found himself immersed in the world of music from an early age. After winning numerous first prizes at the National Youth Music Competition of Germany, he started giving regular concerts with various chamber music ensembles and toured with orchestras in China, Ecuador and Norway.

He received his Bachelor of Music diploma from the Music Conservatory of Mannheim where he studied with Prof. Marco Rizzi. In 2013 he turned his musical skills to composition and won second prize at the Crossover Composition Award with his piece for two violins, Orient Express. Tonio then moved to Arnhem, Netherlands, where he is currently studying in the final year of his second Bachelor at the jazz & pop conservatorium ArtEZ. There he’s studying singing with Hartog Eysman and jazz violin with Jasper le Clercq.

With his Loop Station can Tonio Geugelin be heard and seen in performances where he’s combining his violin play, beatboxing and singing as an all-around musical innovator. Beyond that Tonio is composing and producing music for dance, theatre and film. He is giving workshops and he’s working as a session musician. Tonio plays a violin by Philipp & Andreas Augustin.