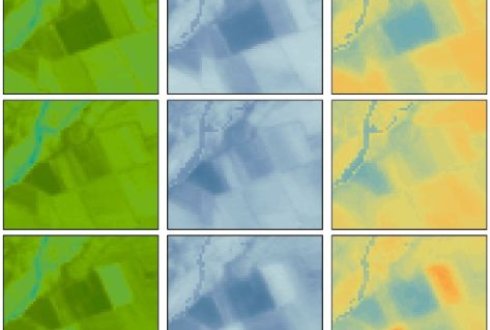 This study attempts to map the evapotranspiration (ET) for agricultural fields in Tashkent province with Remote Sensing models and GIS tools. Agriculture is a large sector in the economy of Tashkent with cotton as the main crop. Fresh water resources in Uzbekistan are very limited and the amount of irrigation water must be managed in a very sustainable way to avoid fast depletion of fresh water resources. ET is one of the basic variables to be known in order to estimate the amount of irrigation water that is needed for any agricultural field. It encompasses the total amount of water that is lost from the soil to the air as water evaporates and transpirates through plants. This study first applied the Remote Sensing model 'Simplified Surface Energy Balance Index' (S-SEBI) to estimate the ET of Tashkent province. To validate the estimated ET the external dataset ERA-Interim (a global reanalysis program with easy access to different meteorological data) was used.

The main data that were used were downloaded LANDSAT images, the NASA POWERSET data for the surface temperature and weather data. A total of 15 observation images from LANDSAT were used in this study of the period 2009-2013. Only cloud-less images could be used for S-SEBI.