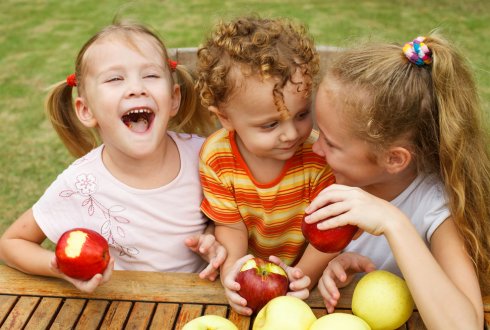 Most children do not eat the recommended amount of vegetables, mainly because they don’t like vegetables. Since the first years of life is a sensitive period in the development of taste preferences, we started a longitudinal intervention study to investigate the effect of starting weaning with repeated exposure to vegetable purées on vegetable intake and liking during the first 2 years of life. The primary aim of this thesis was to investigate whether starting weaning with vegetables compared to weaning with fruit had an effect on the intake and liking of vegetables on the short and on the long term. In an intervention with 101 baby’s

In an intervention study (n = 101) was investigated the effects of repeated exposure to either vegetable purées (vegetable groups) or fruit purées (fruit groups) on infants’ acceptance of vegetable or fruit purées during the first 18 days of weaning. Intake of the purées and mothers’ rated liking were measured in the lab. From a subsample (n = 60), we also measured liking by analysing the infants’ facial expressions and behaviour after consuming green beans purée in the lab. In two follow-up studies, when the infants were 12 (n = 84) and 23 months of age (n = 81), the long-term effect of the intervention was measured on intake and mothers’ rated liking of the purées in the lab. Additionally, infants’ daily vegetable intake was assessed with 3-day food records at both follow-ups. At the second follow-up, also the influence of starting with vegetables or fruits on children’s preferences for sweet and salty tastes (n = 81), were measured with sweetened and salted water solution and by calculating their daily mono- and disaccharides intake from the 3-day food records. Additionally, a systematic review investigated the current status of knowledge about effective strategies to increase vegetable intake in children younger than 3 y.

At the follow-ups, when the infants were 12 and 23 months of age, no differences between the vegetable and fruit groups in green beans or apple purée were found in the lab. Daily intake of vegetables at 12 months of age, was 38% higher (p = 0.02) in the vegetable group (75 ± 43 g) than in the fruit group (54 ±  29 g). At 23 months of age, no significant difference in daily vegetable intake was found between the groups.  Also the 23 month olds’ preference for sweet water solutions and their daily mono- and disaccharides intake did not differ between groups.

Weaning with repeated exposure to vegetables has a positive influence on vegetable intake until at least 12 months of age.