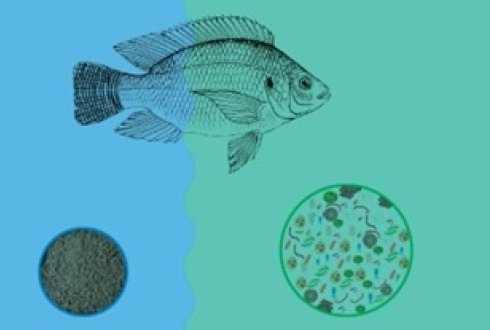 Globally pond aquaculture is the predominant fish/shrimp farming system. Roughly 70% of the farmed fish and shrimps are produced in semi-intensive ponds where feed is a major nutrient supplier but where also natural food contributes to the productivity. Current knowledge on fish nutrition is based on studies where natural food is absent or available at a minimum level. When a complete feed, formulated on the basis of the above nutritional studies, is applied as supplementary feed in a pond where also natural food is available, much of the nutrients are not retained in the fish and the efficiency goes down. The aim of this research was to generate knowledge on how dietary macro-nutrients (with a focus on dietary carbohydrates) determine fish growth directly and indirectly (via natural food) in ponds. In a pond, the carbon to nitrogen (C:N) ratio in the system determines the productivity of natural food. The hypothesis underlying the current PhD research was that lowering the scarce and expensive macronutrients (e.g. protein and fat) in the feed would be compensated by an increased contribution of natural food as a result of a higher C:N input into the system, and thus not leading to lower fish yields. We conducted four experiments to test this hypothesis and have observed that lowering the dietary protein to energy ratio in the feed increased fish production at the pond level, mainly because of an indirect effect of the diet by enhancing the natural food in the pond. The type of non-protein dietary energy (lipid or carbohydrate) did not affect fish performance, not directly as feed nor indirectly via influencing the natural food web of the pond. However, the type of dietary non-starch polysaccharides (NSP) influenced natural food production and ultimately fish growth. Fish performance was better with slowly degradable NSPs in the feed. In all our studies we have noticed that feeding level increased fish production but also increased FCR. We have also observed that fish production increased with increasing stocking density (within the tested levels). Culture intensity (feeding level and stocking density) did not interact with the influence of the dietary macro-nutrient composition (i.e. P:E ratio) on pond productivity which means that enhancement of the natural food web through diets is possible even with increasing culture intensity. So, in ponds with a functional natural food web, the optimal macronutrient composition of supplementary feeds for tilapia differs from the optimal composition as recommended by NRC (1993, 2011) for tilapia. This may be related to the fact that the NRC recommendations were developed without the presence of natural food, and that the effect of the latter may be related to a possible enhancement of its production due to the extra nutrient input in the ecosystem via the waste of the fish (fertilizing effect). However, when monitoring the food web in the ponds, we have barely noticed differences among the treatments. This calls for improved methods to quantify the contribution of natural food to the fish production if this needs to be included in the feed formulation. A paradigm shift, however, is needed in fish nutrition studies, specially for the species produced in ponds under semi-intensive condition, to evaluate the performance of macro-nutrients on the system instead of on the fish for efficiency, and sustainability.
8