Abstract
A number of volatile organic compounds are emitted by fruits during the ripening process. An important compound produced by apples is ethylene which can be used to infer on the optimal harvest time. The current methods to measure fruit ethylene emission are carried out in controlled environments. This method is laborious and expensive. Using an UAV to do in-field measurements of ethylene across the growing season can provide additional information. A study area in an apple orchard in Randwijk, the Netherlands was selected to perform ground and UAV based ethylene measurements with a developed sensor prototype. Additionally, a simulated environment built from field data was used to understand the spatial distribution of ethylene within the apple orchard. The best spatial sampling scheme for capturing the variability of ethylene emissions in an orchard with an electronic nose was estimated and the impact of the drone overflight on the ethylene distribution was determined. The field measurements performed were inconclusive although there is evidence that ethylene can be detected in the field. The simulations showed that the range of ethylene concentration in an orchard is in the ppb range and wind speed has a very big impact on this ethylene concentration. Regarding the sampling scheme, we can conclude that considering a low wind speed condition and the same number of measurements (16), a regular grid sampling design is the best option. The UAV overflight should be performed at the lowest possible height to decrease the impact of the wind flow generated by the rotors on the ethylene distribution. Further study is required in order to model sensor response, evaluate the impact of rotor size in the disturbance effect of the UAV, among other possible research topics. 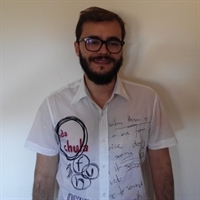