By Tim Jak (the Netherlands)

Abstract
Understanding why and how animals move is essential for conservation purposes. Their movements provide insight in group dynamics, interaction or avoidance behaviour and habitat preferences that could be related to environmental variables, food availability and reproduction strategies. Animal tracking is often done using telemetry. The technology of telemetry is developing fast with increasing resolution, lighter transponders and more sampling points. However, it still has some limitations: the method still requires handlings on the animal, the collar is likely to affect the animal’s behaviour and the transponders are relatively expensive. One of the techniques that offers the potential to aid in tracking animals is Unmanned Aerial Vehicle (UAV) based video imagery. It can cover remote areas and does not require any handlings on the animal. To further improve this technology, it is required to automate the process of detecting and tracking animals in the video datasets. There are already algorithms developed that can automatically find or follow an object, but they have only been tested on videos with humans or traffic as object of interest. It is expected that a wildlife dataset will cause different conditions, with for example shades and smaller, camouflaged animals. Therefore, this study will assess the performance of third-party object trackers and use the best tracker for a joint detector-tracking system. The trackers are assessed on a specifically developed video dataset, called the Kuzikus Wildlife Tracking (KWT) dataset. The dataset contains African wildlife captured from UAV perspective with remarkable characteristics like occlusion, similar objects, objects rotating or abruptly changing their direction and fast camera movement. The following five object trackers are assessed in this study: Kanade-Lucas-Tomasi (KLT), Kernelized Correlation Filter (KCF), Dual Correlation Filter (DCF), Tracking-Learning-Detection (TLD) and Least Soft-threshold Squares Tracker (LSST). The KCF and DCF outcompeted all other trackers, where KCF performed slightly better than DCF. It should be mentioned that KCF and DCF provided the possibility to run on Histogram of Oriented Gradients (HOG) features instead of raw image pixels that were used for the other three trackers. KCF and DCF performed especially well on characteristics like similar objects and objects changing their appearance, but failed in occlusion events and abrupt change of direction. KLT on raw image pixels did succeed in tracking objects that suddenly changed their direction, but failed on most other characteristics. At last, TLD failed on almost all characteristics and was often not able to re-detect objects after occlusion. It can be concluded that KCF performed best on the KWT dataset. Therefore, this tracker is combined with an object detector. This detector can re-initialise the tracker in case it lost the object of interest. Surprisingly, the detector-tracking system performed worse than KCF on HOG features, especially when similar objects were present in the same video. On the other hand, the new system was able to handle occlusion events by using a linear interpolation method. 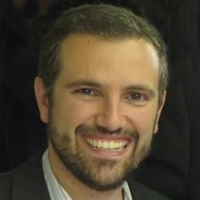