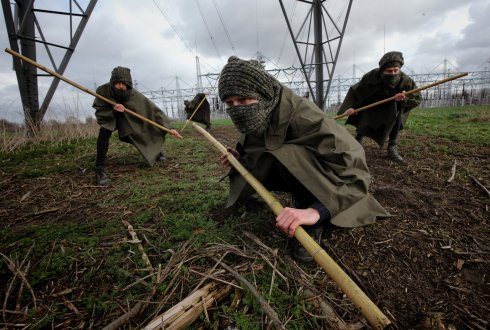 Our new professor and chair Cultural Geography dr. Edward Huijbens links the performance of ‘Waterlanders’ to an Earth oriented progressive outlook for global well-being and inclusive society in times of climate change and uncertainty.

He elucidates how the Earth has trans-mutated from being a background surface for our inscriptions to being a dynamic foregrounded matter of concern arising both from the effects of the current geo-force of humanity itself and its science-mediated attempts to map its functions. How does the Earth communicate with us? What could science and technology become through re-assembling the collectives of humans and non-humans co-constitutive of the Earth?

For Edward Huijbens this assembling is an earthly matter of concern, having to do with responsibilities and attuning to more than human rhythms of life. Moreover, this assembling has the potential to foster an inclusive, egalitarian society that can alter social and ecological relations, necessary to deal with our current climatic state of emergency.

Geographer, scholar of tourism, professor and chair of Wageningen University cultural geography research group. Edward finished a B.Sc. in Geography at the University of Iceland in the spring 2000, MA and later a PhD in Cultural Geography mid-year 2005, both at Durham University, England. In 2004 – 2006, along with completing the PhD, he taught and did research at the University of Iceland, both in the faculty of science and the faculty of economics and business administration. From 2006 – 2015 he directed the Icelandic Tourism Research Centre and developed a holistic research agenda for tourism during a period of the industry’s exponential growth in Iceland. From 2015 till 2019 Edward was a professor at the school of social sciences and humanities at the University of Akureyri, where he also served as department head for the faculty of social sciences and law from 2017 till February 2019.

Edward works on tourism theory, issues of regional development, landscape perceptions, the role of transport in tourism and polar tourism. He is author of over 30 articles in several scholarly journals such as Annals of Tourism Research, Journal of Sustainable Tourism, Tourism Geographies and has published three monographs in both Iceland and internationally and co-edited four books.

Beyond regular academic mentoring and course teaching Edward has taught twice on the prestigious programme Semester at Sea, run by the Institute of Shipboard Education from the US, autumn 2016 and autumn 2018. On the latter occasion he ran Global Studies, the course all student aboard are require to attend. Edward is the author of articles in several scholarly journals in both Iceland and internationally and has co-edited Technology in Society/Society in Technology (2005, University of Iceland Press), Sensi/able Spaces: Space, art and the environment (2007, Cambridge Scholars Press) and The Illuminating Traveller (2008, University of Jyväskylä), Tourism and the Anthropocene (2016, Routledge) and is one of two authors of the book Icelandic Tourism (Forlagið, 2013).

In addition to his academic roles, Edward has been politically active with the Left Green party in Iceland, serving in several municipal committees for his home community, Akureyri (pop. 18.000), acting as reserve member of parliament and as of 2017 serving as the party’s vice chairman as the party led the government coalition formed after the 2017 autumn elections in Iceland.

Other events in this series: