The comparison of WALRUS and SWAP

Lowland hydrological models have been developed for a long time to satisfy water and agriculture manage-ments, especially water forecasting, and they are still on demand. WALRUS (Wageningen Lowland Runoff Simulator) is a rainfall-runoff model that performs on the catchment scale. SWAP (Soil Water Atmosphere Plant) model, on the other hand, is a field-scale model to simulate the water balance and the transport solute and heat. These two models fill a different niche in hydrology, leading to a hypothesis that if they can be adapted together, they may provide better modelling on water flow routes and chemical transport in the future. To do so, a lot of studies is required.

This thesis project was the initiation with the research objectives to investigate the differences and resemblances between WALRUS and SWAP, and to analyse the possibility of supplementing them to each other. The experiments were conducted on the field scale and the catchment scale. Simulations with different scenarios regarding yearly weather conditions, crop types, soil types, drainage levels and channel levels were performed and outputs between both models were compared. On the field scale, the model simulations were conducted with the hypothetical lowland areas with one soil type, crop type, drainage level, and drain type (tube drains). The Nash-Sutcliffe efficiency and Root Mean Square Error indicated high goodness of fit of the actual evapotranspiration outputs, but low goodness of fit of the quickflow and groundwater level outputs between the models. On the catchment scale, the models were applied to the Hupsel Brook catchment at which SWAP was up-scaled using catchment area fractions before it was compared to WALRUS. Similar to the field-scale experiments, the simulated actual evapotranspiration by both models were significantly resembled. On the other hand, the simulated quickflow, groundwater flow and discharge were relatively different.

From the model analysis, it can be concluded that the differences between the models outputs is caused by the difference between the model structures. In particular, it was clarified that the interactions among surface water, unsaturated soil water and groundwater simulated by WALRUS and SWAP were not completely the same. The major differences between the models were the composition of macropore flows, ability to simulate a multiple drainage system, defined flow routes, vegetation interaction to water movement, and composition of evapotranspiration. The models show more resemblance on the catchment scale compared to the field scale. The conceivable recommendation from this research for complementing both models together in the future is to employ the potential evapotranspiration output from SWAP as the empirical input of WALRUS in order to add the vegetation interaction to the model. 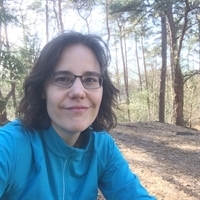