We study the applicability of 1D transverse slope sediment transport equations by Talmon(Talmon1995), on lightweight sediments. This is done by executing a bed-leveling experiment with polystyrene in the Kraijenhoff van de Leur laboratory.

We study the applicability of existing transverse slope sediment transport equations to laboratory experiments with lightweight granulates. Polystyrene with a density of 1055 kg m-3  is used as a surrogate for sediment. Bed levelling experiments are performed in the Kraijenhoff van de Leur laboratory for Water and Sediment Dynamics at the Wageningen university. The set of experiments consists of two 'shallow water' cases and a 'deep water' case, in which a cross-stream S-profile of the bed is created in a 14-m long current flume. In the longitudinal direction, the sloping bed is uniform. The shallow and deep water cases differ only with respect to water level. Based on simulations with a theoretical model, all cases are predicted to have a similar bed levelling time scale. The results of these experiments are intercompared and confronted to the bed developments predicted from the 1D model equations. The two shallow water cases, repeated with the same initial conditions, are similar in their behaviour for the first 60 hours, showing that the experiments are reasonably reproducible. All cases show a large and pronounced bed levelling event that occurs 10 hours after initiation, which dominates the overall bed levelling development. This signal propagates from upstream to downstream through the test section, and first arrives in the shallow part of the transverse slope. This abrupt levelling does not agree with the 1D model results and is considered to be an artefact dependent on the initial conditions. A smaller water depth results in a less extreme bed levelling event that becomes manifest after the initial disturbance has travelled from the start of the flume to the monitoring section. Bed levelling in shallow water is better described by the smooth predictions from the 1D model equations than the levelling developments in deeper water. The theoretical model overestimates bed levelling in the initially shallow part of the transverse bed profile, and underestimates levelling in the initially deep part. The model captures the general morphodynamic behaviour reasonably well, but the exact timescales are not predicted correctly. This study suggests that existing parameterizations for transverse bed slope transport are applicable to lightweight sediments, but initial effects blurred the results too much to allow for a detailed verification. It is recommended to infer the transverse slope effect more indirectly, using an experimental setup that yields results that do not depend on an initial period of spin-up. 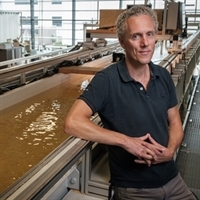