Images of snow in the Rietholzbach catchment in Switzerland have been collected using low-cost time-lapse cameras. The aim was to derive snow parameters from the time-lapse images and to use the resulting data for validation and calibration of snow models.

Modelling snow melt is important for water resources management, the assessment of spring flood risk, drought prediction and climate modelling. Snow models have different approaches of variable complexity to simulate snow melt, ranging from simple bulk methods based only on temperature to multilayer models that solve the energy balance distribution throughout the snow pack. Snow melt models require observations for calibration and/or validation. Traditionally snow data is based on point measurements. Such local measurements will not always detect significant spatial snow cover variations. To obtain more spatial information in snow data, time-lapse photography can be useful. In this study, images of snow in the Rietholzbach catchment in Switzerland have been collected using low-cost time-lapse cameras. The aim was to derive snow depth, snow interception by vegetation and snow albedo from the time-lapse images and to use the resulting data for validation and calibration of two types of snow models: a simple conceptual model based on the degree-hour method and a more advanced physically based model (VIC). The method to detect snow depth in the time-lapse images was usable, but there was not enough variation in snow depth during the observed period to apply the method in this case. Unfortunately the images were also not usable to detect snow interception on vegetation and snow albedo in a proper way. However, snow presence (snow/no snow) in ground polygons in the images has been successfully detected and analysed. The derived snow data have been compared with the measured snow depth from a measurement station in the same area. Especially on steep slopes differences in aspect has a large influence on snow presence. On north-facing slopes snow remains longer than on flat areas, while the snow on south-facing melts much earlier. This is not represented in measured snow depth that only measures at one point in the catchment. In both models this small scale variability is also not represented. The VIC model gives substantial differences for different elevation bands, while the observed differences for different elevations were generally much smaller than the observed variability in the time-lapse images caused by the different aspects. For the degree-hour model both the calibration on the (limited available) snow presence data as the calibration on the (more detailed) snow depth measurements performed well to simulate snow water equivalent. Although the VIC model has more advanced options to model snow presence under different circumstances, calibration of this model on snow presence did not improve the model predictions, probably because of the poor performance of the reference model and the low sensitivity of the snow parameters that can be calibrated in VIC. If a model is able to simulate snow on small scale correctly, the snow data derived from time-lapse images is expected to be more useful for calibration, especially for models that simulate differences caused by variation in aspect. 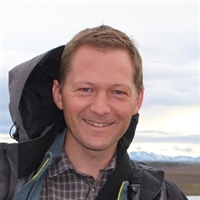