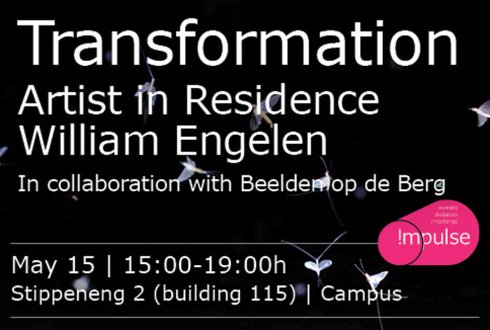 This year’s eleventh edition of the (inter)national outdoor exhibition Beelden op de Berg (Sculptures on the Mountain) will be held not only in Belmonte Arboretum in Wageningen, but also on Wageningen Campus. Under the poetic title of ‘Summer Snow’, 10 artists, all drawing inspiration from the theme ‘eternal rejuvenation’, will present their new work in Belmonte Arboretum from 17 June to 23 September. With this theme, Beelden op de Berg fits in with the celebration of 100 Years Wageningen University & Research.

In the run-up to the exhibition in Belmonte Arboretum, the public will have the opportunity to view the work of three of the participating artists on Wageningen Campus: William Engelen, Anne Geene and Lizan Freijsen.

William Engelen and Anne Geene, both Artist in Residence, are extending their atelier to the campus. In this scientific environment of scientists and students, they develop and elaborate their plans for the exhibition. William Engelen embedded in the meteorology group of Bert Holtslag and Bert Heusinkveld and Anne Geene in the nature conservation group of David Kleijn. Their research will be presented and placed in a wider context in two afternoon meetings organised by Studium Generale and Impulse in collaboration with Stichting Beelden op de Berg.