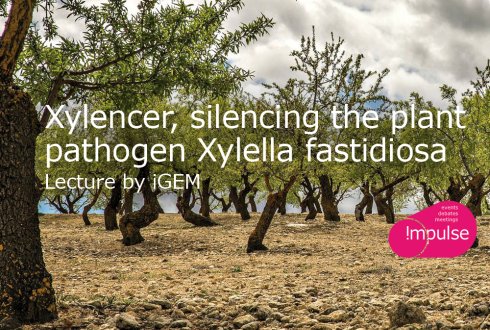 Xylella fastidiosa is regarded as one of the most dangerous plant pathogens, mainly due to a lack of control measures against this plague. This is why the Wageningen iGEM team has chosen this topic for their project in this international synthetic biology competition. In this lecture we will explain the problem and how this led us to the solution we have designed over the summer.

Xylella fastidiosa has been causing problems in north- and south-America for over a century. Even though the bacterium has been identified as the causal agent of many plant diseases over the past four decades, there still is no treatment. Recently the pathogen has been detected in Europe, where it is rapidly spreading throughout the Mediterranean, despite strict quarantine measures from the EU. The pathogen shows no signs of slowing down and predictions tell us the pathogen is liable to spread further north, to countries like the Netherlands. Alarmingly, Xylella fastidiosa is also known to continuously adapt to infect new plant species, meaning that it could only be a matter of time before the pathogen also poses a threat to Dutch fruits like apples, pears and cherries. That is why we want to act now!

Currently, farmers try to control the bacterium by spraying large amounts of pesticides, burning diseased plants and preventatively removing susceptible plants near areas of infection. Despite all these measures the disease is still spreading through Europe.

Our project, Xylencer, in collaboration with the Wageningen University, is exploring the possibility of using the natural enemies of bacteria, bacteriophages, to treat this disease. With this project, we lay the foundation for the use of bacteriophage therapy in combatting Xylella fastidiosa. By providing an effective alternative, we hope to reduce the use of pesticides. Current applications of this type of therapy to other plant diseases suffer from low efficiency and have a laborious application process. With our project, we aim to improve the application by:

With this project, we will represent the Wageningen university in the international Genetically Engineered Machine (iGEM) competition. The iGEM competition challenges teams of students from around the globe to solve real-world problems using synthetic biology. The competition builds up to the Giant Jamboree in Boston, that takes place in the beginning of November. At the Giant Jamboree over 350 teams will present their projects in front of 3500 fellow students, supervisors and jury members.

Because iGEM teams engage in real-world problems, it is important to focus on more than science alone. We aim to achieve this by engaging with the general public, in order to raise awareness on the dangers of this plant pathogen and inform people on how they can help limit the spread of this pathogen. We also aim to discuss with experts and stakeholders in order to incorporate their feedback into the direction of our project.

Synthetic biology is where engineering meets life science, meaning it combines the knowledge of biological systems to construct smart biological circuits, allowing us to reach solutions previously unattainable.  We, the Wageningen University & Research 2019 iGEM team, take on the challenge of using synthetic biology to combat Xylella fastidiosa. In this, we hope to advance the field of science and promote the role synthetic biology can play in solving the problems of future generations.