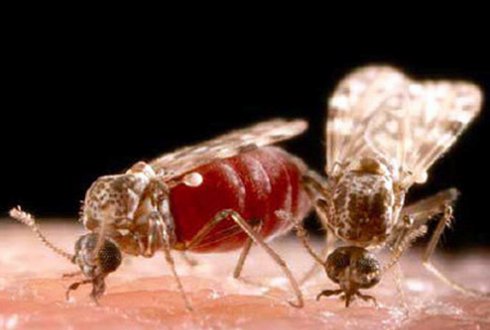 In 2006, the Netherlands was surprised by incursion of bluetongue serotype 8 (BTV8). Since 2009, no new BTV infections have been found in the Netherlands. After years of absence, the same BTV8 re-emerged in France in 2015.

In recent years, the bluetongue situation in Europe was relatively quiet. Due in part to mass vaccination, BTV8 was confined to Sardinia and Corsica and to a single island near the coast of Turkey. Until mid-2014, many European countries were officially declared free of bluetongue. At that time, bluetongue was limited to Spain with serotypes 1 and 4, and southern Italy (including Sicily) with serotypes 1, 2, 4, 9 and 16.

Serotype 4
In the summer of 2014, Greece was unexpectedly hit by an outbreak of bluetongue serotype 4, which spread rapidly through the Balkans. By December 2014, the disease had spread northwards to Croatia, Hungary and Slovakia. Until then, only outbreaks of BTV9 had occurred in the Balkans. In Spain, serotype 4 once again spread northwards in the area where the African insect vector of BTV, the midge Culicoides. imicola, is present, while serotype 1 was kept reasonably under control.

Variants
The variants of BTV serotype 4 in Western and Eastern Europe are unrelated as shown by full genome analysis. The variant in the Balkans had not been described before and appears to consist of multiple components (genome segments) of previously identified bluetongue viruses. This phenomenon is known as reassortment or genetic shifting, which also occurs with the influenza virus. It is worrying that this BTV4 is likely spread by midge species such as C. obsoletus, which is also present in Northwest Europe.

Virus can withstand temperate winters
In 2015, the variant of serotype 4 was again reported in various Balkan countries. This means that this virus, like BTV8, can overwinter in areas with a temperate climate and fairly severe winters. In the autumn of 2015, this variant also reached Slovenia and Austria. The further spread of this virus by midges will probably be blocked by the hills and mountains surrounding the currently affected area, which was previously the case for serotype 9. But this is not particularly reassuring.

Alarming situation in France
The current situation in France is very worrying. In August 2015, BTV8 was detected again in mid-France. It turned out to be the same BTV8 that was firstly detected in Limburg in the Netherlands in August 2006. This BTV8 caused the gigantic outbreak in 2006-2007 and spread throughout Northwest Europe. It is speculated that very low levels of the virus had been spreading undetected in France for a number of years. The increased percentage of unprotected ruminants – due to newborn animals and the lack of vaccination – was apparently sufficient to cause the new outbreak. The affected area extends from the Mediterranean to Paris and beyond in the end of November. The French authorities have used their very limited supplies of BT vaccine against serotype 8 to safeguard animal exports.

2016?
In the last week of November, central France experienced cold weather. The expectation is that further spread of BTV8 will be therefore limited. However, it is unclear what will happen in 2016. Many countries are consulting the situation and what to do regarding preparedness for 2016.