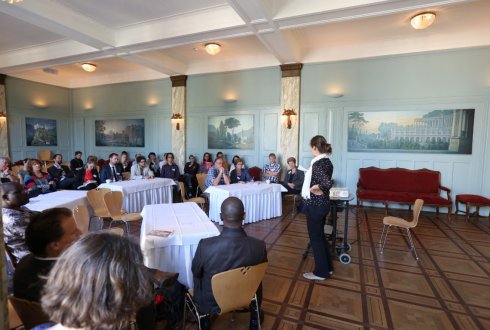 This session focuses on the potential role for elites in bringing about change, with contributions by Patrick Milabyo Kyamusugulwa (WUR) and Anette Hoffman (Clingendael), and an introduction by Gemma van der Haar (WUR/IS Academy).

Gemma van der Haar starts with an introduction to the topic. Local political and economic elites are often seen as ‘spoilers’ of development efforts. The concept of elites is elusive but refers to people who are ‘above others’ in terms of resources and power. Discomfort around the topic is related to the fact that speaking about elites is speaking about inequality. Core question of this session is: Could elites be engaged - appealing to their sense of public responsibility - in situations of fragility?

According to Mr Milabyo, elites can play a role in finding entry points for development in fragile contexts. When talking about community driven reconstruction in the DRC, the local elite, rather than being excluded, was able to play a large and often decisive role in mobilizing people to contribute with their labor. An important lesson included: investigate the complexities of power relations around the intervention.

Ms Hoffmann then explains how the World Development Report 2011 discusses elites. The role of elites in the dynamics of implementation, whether destructive or constructive, cannot be ignored. One of the pressing questions is what the (unintended) consequences are of interventions aiming to mobilize elites on the power constellations in a given area. And what is the incentive for problematic elites to change?

We would love to hear what you think. Please react through the form below: