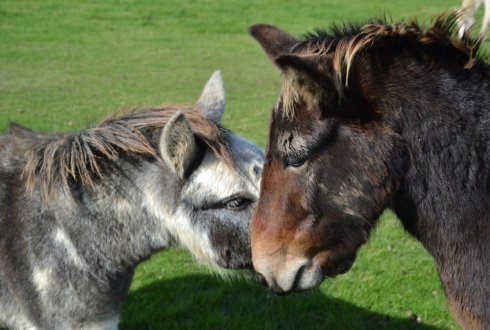 Equine gut microbiology studies to date have primarily focused on horses and ponies, which represent only one of the eight equine species that exist today. This is despite asses and mules comprising almost half of the world’s domesticated equines, and donkeys being superior to horses/ponies in their ability to degrade dietary fibre. In our recently published study, we characterised anaerobic fungi, archaea and bacteria in the faecal microbiota of a range of equines including horses, ponies, donkeys, horse × donkey (i.e. mules/hinnies) and zebras.

We found that equine type had an effect on both faecal microbial concentrations and community composition. Whilst anaerobic fungi and archaea were present in all of the 70 animals studied, there was no one type of anaerobic fungi or archaea that was common to all the animals. This was not the case for bacteria. The types of bacteria common to all animals represented a much larger proportion of the equine faecal microbiota than previously reported. This was primarily due to the detection of predominant bacteria belonging to the phyla Kiritimatiellaeota (formerly Verrucomicrobia subdivision 5) and Spirochaetes. The lack of microbial cultures representing some of the common bacteria needs to be addressed, as they provide essential knowledge of the microbial functions that underpin the equine hindgut microbial ecosystem.

For further details please read the open access paper which can be accessed here.

Back to the main project page