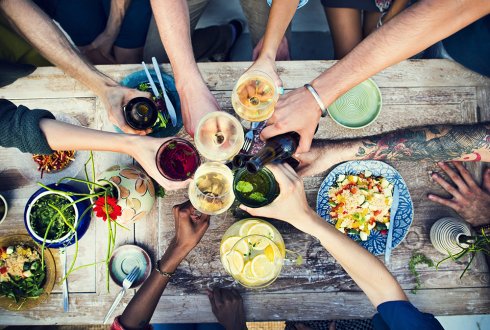 People eat healthier foods and food is less frequently thrown away if restaurants take advantage of insights into the behaviour of their guests. Together with restaurants and other businesses, Wageningen researchers are developing new methods for investigating that behaviour by monitoring the choices people actually make.

Customers at Van der Valk restaurants have been responding positively to being given less meat and more vegetables on their plates. Furthermore, this results in less food being thrown away. This was all indicated in the “real-life” experiments that researchers from Wageningen Economic Research conducted at the restaurant chain. Customers received 13 per cent less meat and twice as many vegetables on their plates than is typical. Surveys were given after the dinner that requested customer responses. Additionally, students measured the food remnants in the kitchen in order to know how much people had actually eaten. The results were compared with a control measurement at restaurants where the servings were not changed.

The healthier offerings resulted in a third less meat being thrown away and more vegetables being eaten. That’s good news: not just for the health of the client, but also for the state of the planet. In addition, it is ultimately less expensive for the restaurant.

This is an example of the type of study conducted in the public-private project Food Value Impact, in which Wageningen Economic Research collaborates with a consortium of 20 businesses and non-profit organisations. The project provides businesses such as restaurants, hospitality services, and producers of packaged meals with new insights into the behaviour of consumers.

Living lab is a new research approach where we not only use a lab-environment, but where we test behavioural insights in a multi-disciplinairy way and in a 'real-life'-situation with 'real people'. WUR, for instance, uses this method for behavioural research on nutrition and climate change.
Twitter Whatsapp Linkedin Email
Menu