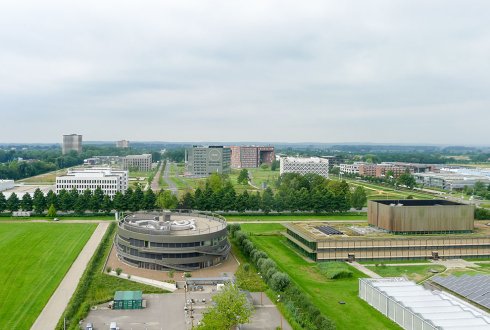 Business parks are often uninspiring. They tend to be a collection of giant, grey office buildings with car parks or massive factories surrounded by big fences. But that doesn't have to be the case, and the economy, people and climate can benefit from a different approach too.

A century ago, it was very normal for companies to be located in the middle of the city. Some companies even built a residential area for their employees near the factory: a factory village. Philipsdorp (Eindhoven) and Heveadorp (Renkum) are examples. It ensured both the loyalty and well-being of factory employees.

The origin of business parks

The business park - a district devoted entirely to companies - originated with the emergence of spatial planning in the middle of the last century. Public authorities preferred polluting and noise-making companies to move to the edge of the city. It also fitted in with the idea of separating functions, with different locations for living, working and recreation. Then, in the 1980s, companies were classified into environmental categories because not all types of businesses go well together. There are now 3,600 business parks in the Netherlands, with several in each municipality. As a rule, the focus is on square metres and efficiency.

Day in, day out

However, this 'spatial segregation' seemed to ignore the fact that people spend length periods there, day in, day out. The estates are often used intensively for such things as office parks and manufacturing. If all these people were there not to work but to live or to rent a hotel room, the same location would look very different. To begin with, it would be much greener. Moreover, you often see areas zoned as green belt or business park directly bordering each other.

Wageningen is working with leading entrepreneurs and public authorities to create green business parks. They realize that a green business park benefits the companies. Because, as it turns out, employees value a green working environment. It also benefits their health, because it invites them to take a walk during their lunch break. It also reduces stress and boosts their well-being. Even a view featuring plants and flowers can be important. A green workplace is especially indispensable for a company where people are the most important production factor.

Of course, more greenery also provides opportunities for nature and conserving diverse array of plants and animals. Companies can respond to this by conducting nature conservation in their own grounds with their employees, for example. This strengthens mutual ties and increases the involvement of employees in the company. If the grounds also become an attractive area for residents, and if you can establish links with nature work groups, for example, your company will also increase its support in your neighbourhood.

Finally, there is also a climate aspect. Many businesses have flat roofs and their grounds are often completely paved or asphalted. This impedes rainwater drainage. It helps to construct green roofs, green facades and natural water storage such as ditches, ponds and wadis. Just like the city where people live, a climate-smart business park has more greenery. A green roof also provides natural cooling, as do the trees in the grounds.

In Zoetermeer, the Heineken brewery has risen to the challenge. At Wageningen University & Research, we are supporting that with research. In a complete project to make the brewery sustainable and carbon neutral, called Green Circles, the surrounding area has been laid out as a bee conservation zone and we are working on a water purification marsh. Sustainability is being used as a unique selling point. At Brainport Eindhoven, too, the creation of a green environment is seen as a factor in attracting knowledge workers. Going green is therefore set to play an increasingly important role in the battle for talent.

Greenery is not only beautiful; you can also make it work for your company. By thinking freely and innovatively, an business park can also become a pleasant place for work and leisure.