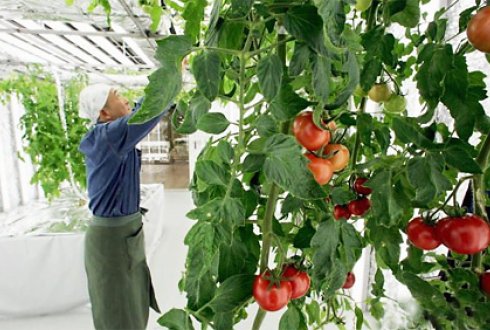 Minor-thesis abstract (submitted 20 August 2015): Climate change is induced by increases in the atmospheric greenhouse gases concentration due to anthropogenic activities. Climate change might affect agricultural production that will be more needed for increasing world population. Therefore, much research has been conducted about the impact of climate change on yield in field crops by using crop model simulation, whereas no research has been conducted in greenhouse to date.

In Japan, tomato (Solanum lycopersicum) is common vegetables and domestic production in the greenhouse accounted for most part of harvest. The aim of this study was to explore the impact of climate change on tomato production in greenhouses in Utsunomiya-city in Tochigi prefecture in Japan in 2050s. Research questions were (1) Will the tomato growing period decrease in 2050s? (2) Will the tomato yield in summer decrease? (3) Will the tomato yield in winter increase with decreasing energy use? (4) What is a possible adaptive strategy for greenhouse construction and equipment in 2050s in response to climate change?

To this end, GTa-tools simulated the greenhouse climate and tomato yield in 1995 and 2050s. Projected atmospheric CO2 concentration by Intergovernmental Panel on Climate Change (IPCC) and the projected temperature increase by one of the Atmosphere-Ocean Coupled General Circulation Models, MIROC3.2-MEDRES, were used for outdoor climate in 2050s. Validation of the GTa_tools was not conducted because algorithms of climate control were different between simulation and observation. Verification showed that GTa_tools reasonably worked by following underlying mechanisms, though indoor temperature was underestimated and total dry weight (TDW) was overestimated by 54%.

Simulation results of Gta-tools showed that heat stress would increase in summer in 2050s compared to in 1995, resulting in lower growth rate of tomato in summer in 2050s. On the other hand, in winter, tomato yield would increase with decreasing heating demand in 2050s thanks to the higher atmospheric temperature and CO2 concentration. The growing period of tomato would not change in 2050s from 1995 under the current growing season (tomato was transplanted on 1st September, and harvest finished on 31st July), although the duration and amount of heat stress were expected to increase by more than 73%. In total, tomato yield would increase 28% in 2050s compared to in 1995, because the positive effect of higher CO2 concentration in 2050 was larger than the negative effect of more heat stress in 2050s under the condition without CO2 injection. Total energy use for heating decreased by 30.6% from 1995 to 2050s. In winter, CO2 depletion happened, when the combination of ventilation and heating were not allowed. Introducing CO2 injection increased yield by 48% in 1995 and by 16% in 2050s. Installing fog application system reduced duration of heat stress by 82% in 1995 and by 77% in 2050s; however, TDW did not increase so much under the current growing season (+1.8% in 1995 and +4.3% in 2050s).

This study showed that the positive effect of elevated CO2 concentration was higher than the negative effect of temperature increase in 2050 compared to in 1995 for tomato production in greenhouses in Utsunomiya-city in Japan. In order to make quantitative analysis more precise, it is recommended to calibrate GTa_tools to Japanese condition.