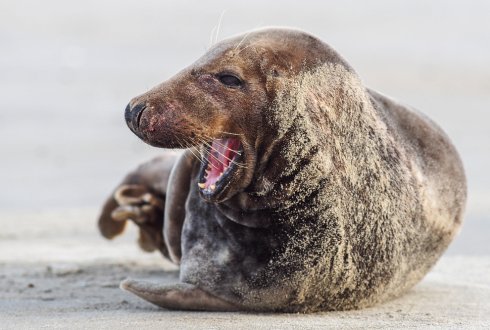 According to seal expert Sophie Brasseur, we already know quite a lot about the presence and movements of seals in the North Sea. But the most important thing that she and other researchers are eager to quickly find out, is to see if and how animals react as a result of major changes. For example, what are the effects of the enormous scaling-up plans of offshore wind farms for the seal population? With current knowledge, we cannot foresee the consequences.

Compared to other marine animal species, far fewer people know that seals also live in the North Sea. Seals are mainly associated with the Wadden and the coastal areas.

For 20 years, Brasseur has been making the habitats and migration routes of seals in the North Sea visible to, among others, the government and the wind energy sector. This is done through telemetry, so that individual behavior and spatial use is recorded through geographical positions and dive data.

Changed seal behavior up to fifty kilometers from pile-driving sites

Research is also being conducted into the effects of underwater noise on seals during the pile driving of the turbine masts in the sea. With their relatively low frequency hearing, seals hear this noise at a great distance. Up to fifty kilometers outside the driving location, changed behaviour of seals is recorded. That is much further than the reactions measured in porpoises, which are known to be sensitive to noise.

In addition to stress, disturbances caused by noise can also mean that the animals have to forage less or have to go on longer treks to food areas. "We don't have much knowledge of this yet. At present, we can only describe what we see as accurately as possible via data, so behavioural changes during pile-driving. It is also important to find out what the effects are of wind farms in operation on seals, "says Brasseur.

The Dutch seal as a top model for research

Partly due to the large amount of transmitter data existing at Wageningen Marine Research, the seal appears to be an ideal instrument for modelling research, and therefore for scenarios for the long-term effects of wind at sea. This allows individual behaviour to be measured. In addition, the annual census also has a huge database on the population development of seals, so that a link can possibly be made with long-term survival.

With the help of funding from both an NWO research fund and the wind sector, researchers Sophie Brasseur and Geert Aarts are working on an individual-based model. This will be used to create scenarios about the impact of a strongly changing North Sea landscape on seals. The model will also be translated to quantify the effects of the declining habitats of seal species in the Arctic, by receding sea ice.