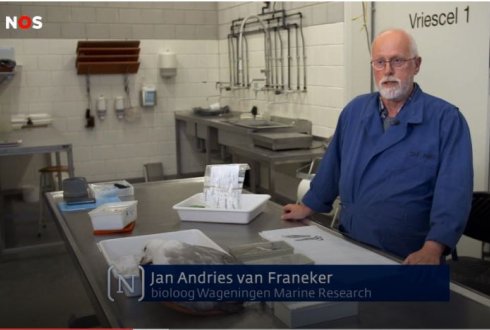 On 16 January 2020, the Dutch national TV-news program Nieuwsuur broadcasted a documentary on the problem of industrial plastic granules in the marine environment. Television attention had been triggered by a detail press-report (also available in English) on this topic by the Plastic Soup Foundation.

Anniversary of the ZOE container incident

The attention for industrial pellets in the marine environment was the anniversary of the incident with the containership MSC ZOE in early 2019. The MSC ZOE also lost containers holding bags of industrial plastic pellets. The University of Groningen reported that around the Waddensea at least 24 million ZOE pellets had beached.

The Plastic Soup Foundation now reports that in Europe alone daily hundreds of ZOE incidents occur from pellet losses around factories and during transport. This is illustrated by studies along riverbeds and roads in the vicinity of plastic industries in the harbours of Rotterdam and Antwerpen.

The filmteam also visited Wageningen Marine Research in Den Helder because of the harm that industrial pellets may cause to marine wildlife ingesting them. On camera, Jan van Franeker opened the stomach of a Northern Fulmar, which was found to contain four industrial granules plus quite a lot of other plastic particles.

Currently fulmars from the southern North Sea have an average of almost 2 industrial plastic pellets in the stomach.  Vandaag de dag zitten er gemiddeld een kleine twee industriële korrels in de maag van een stormvogel uit de zuidelijke Noordzee. The good news is that this represents a consderable improvement since the 1980s when each fulmar averaged over 6 industrial pellets. But after initial improvement further reductions in this century are annoyingly slow.

The photo of the opened stomach shows four industrial pellets on the far left. To their right are two cells of foamed polystyrene. Next there are 14 fragments of harder plastic objects, and to the far right a clipped tip of a plastic squeeze bottle can be seen. This stomach thus contained 21 plastic particles, with a combined mass of 0.35 gram. Such content is not very different from the average quantity of plastic found in stomachs of fulmars beached in the Netherlands. Over the 2014-2018 period, among 115 fulmar stomachs studied, we observed a Dutch average of 24 plastic particles per bird with an average mass of 0.26 gram per bird.

Read the press report by The Plastic Soup Foundation