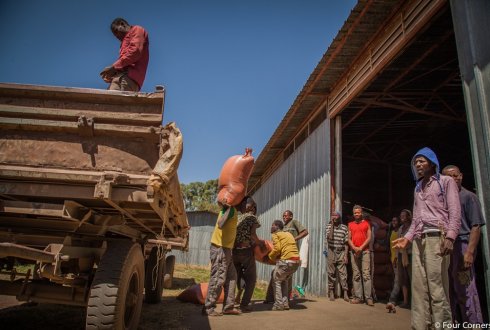 The way farmers in Ethiopia get their seed has become more efficient in recent years. They also have a bigger say in the matter. That is because social innovation in the seed sector has resulted in a smarter system of direct seed marketing by companies, and crowdsourcing in which farmers choose their favourite varieties.

The Ethiopian government has historically played a large role in the production and distribution of seed for farmers, as the country had a planned economy until 1991. The current policy is aimed at liberalisation, but the reality is often different. Until 2011, the government took stock of how much seed farmers needed, instructed seed companies to produce that seed, and arranged for its distribution through farmers’ cooperatives. A lot of seed went to waste in those cooperatives’ stores, because farmers used less than expected.

The Integrated Seed Sector Development program in Ethiopia (ISSD Ethiopia), supported by the Wageningen Centre for Development Innovation, has facilitated social innovation in the sector in recent years, and now many seed companies market their seeds directly to farmers. ‘In our view, social innovation means lasting meaningful change,’ says Gareth Borman, an advisor at Wageningen Centre for Development Innovation. ‘It's about new and better ways of working. Like moving from a centralised system of state-led allocation and distribution of seed, to companies marketing their seed products directly to farmers. Direct seed marketing dramatically increases efficiency in distribution and has reduced costly seed waste, in some cases by a factor of more than six.’

In 2011, a small-scale pilot was set up with two seed companies, in just two Ethiopian districts. The pilot was conducted because smallholder farmers prioritised the lack of timely available seed as the most important problem in their area. The companies needed to develop a new attitude and new knowledge and skills, so ISSD Ethiopia set up training, experience sharing, coaching, supervision and monitoring.

Higher-level government officials were not immediately convinced, fearing that if they deregulated the seed market, higher prices would squeeze out poorer farmers. To achieve social innovation required going off the beaten path. The first pilot did not include national policymakers; it was restricted to local government, companies and farmers. Later, ISSD Ethiopia was able to convince more policymakers of the effectiveness and efficiency of direct marketing of seeds, because evidence generated through action research had been documented in a systematic way. Since then, the pilot has gradually expanded to 228 districts, more than half the total number of districts in the four most agriculturally productive regional states of the country.

‘The lesson about social innovation,’ says Borman, ‘is that it was important that the innovation started small scale and based in practice. Another critical success factor is that the companies, farmers and local government officers were involved from the start.’

This was the case in another experiment as well, which originated from priority problems of farmers as well.  In 2017 and 2018, 18,000 farmers received small quantities of 280 different seed varieties from ISSD Ethiopia. The farmers tested them on small plots of land on their own farms and indicated which variety they preferred for different traits. Agricultural advisors gave the farmers information on how to grow the varieties. ‘We call it crowdsourcing,’ says Borman. ‘Through this citizen science, we received a lot of data about the preferences of farmers. Moreover, farmers get immediate access to new varieties. They can experiment with these on their own field and exchange the seeds with others and thus improve their cultivation, like farmers have been doing for thousands of years.’

The data on the farmers’ preferences are shared with researchers at national agricultural research organisations, who use it for breeding new varieties, and with seed companies that want to incorporate preferred varieties in their product portfolios. ‘Extension services like this approach too, as it’s an efficient way to expose many farmers to new and improved technologies.’