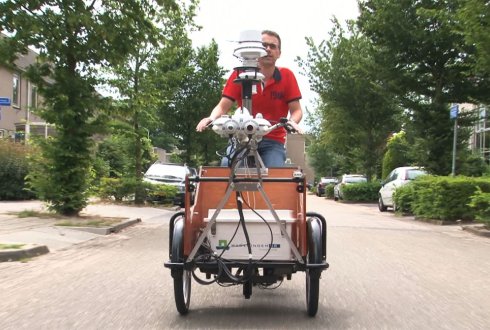 Cities are warmer than their surroundings and climate change is further increasing urban temperatures. The centre of big metropolises can be up to 10 degrees Celsius warmer than the countryside.

The heat waves that affected Europe in the summer of 2003 and 2006 resulted in thousands of heat-related deaths among the elderly. The heat wave that affected France in 2003 resulted in 14,802 deaths according to the French National Institute of Health. These terrifying numbers alarmed the population, demanding city climate change adaptation.

Bert Holtslag and his colleagues from the WUR Chair group of Meteorology and Air Quality found that urban heat islands affect not only big cities in warm areas but also small towns in the Netherlands. The centre of Wageningen during a nice summer evening can be 6 degrees warmer than the countryside. To analyse the factors that contribute to this increase in temperature in cities, WUR has developed a bike equipped with a weather station that records radiation from the sun, reflected radiation from buildings, humidity, temperature, etc. Thanks to this data, gathered by a network of urban observations and model studies, an app has been developed to inform the public authorities and citizens about streets with a high risk of overheating, or the least polluted roads for a bike ride.

This information is also useful to determine what factors make an area more adapted to climate change. The Netherlands is not well adapted to hot summers, and cities should have more coverage to avoid radiation. Imitating nature is usually the best solution, and tree coverage is the best alternative to making our streets more livable. WUR keeps on monitoring the effects of climate change while proposing climate solutions to deal with this major challenge of the 21st century.

Do you have a question about urban climate change adaptation? Ask our experts: dr.ing. BG (Bert) Heusinkveld
Contactformulier + Meer (1)

More examples from our research portfolio