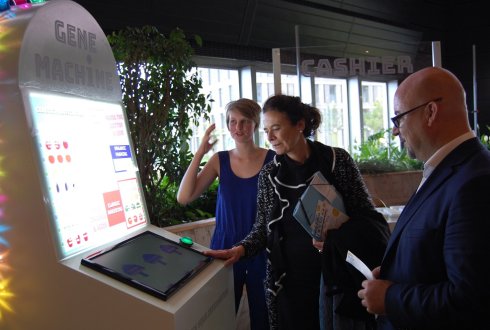 Instead of trying to convince people of the advantages of synthetic biology, Vítor Martins dos Santos wants to hear from others how they would – or would not – use its potential. This ‘two-way traffic’ is a different approach than was taken with genetic modification, says the Wageningen professor.

While there seem to be similarities between synthetic biology and genetic modification, there are important differences, according to Professor Vítor Martins dos Santos, chair of Systems and Synthetic Biology at Wageningen University. One of these, says Martins dos Santos, is that in Wageningen citizens, businesses, the authorities and other stakeholders discuss how synthetic biology is put to use.

‘Synthetic Biology is one of Wageningen University and Research’s investment themes,’ explains Martin dos Santos. ‘From the very start, synthetic biology has been embedded in the social context.’ Researchers talk with researchers from other disciplines, including the social sciences, but also with policymakers, businesses and civil society organisations – about the ethical, social and legal aspects.

Social scientists held workshops with Martins dos Santos’ colleagues, in which they established a framework for Responsible Research and Innovation (RRI). ‘To get a good idea of the societal implications of synthetic biology applications, you have to think broadly. And to do that you need help from others.’ Martins dos Santos and his colleagues talked to a wide range of people to gain an understanding of the scope of new technologies. And also to learn who they need to involve in their work. This way of working demands a different research culture, says Martins dos Santos. ‘We want to get researchers to think collaboratively with all stakeholders right from the start.’’

So researchers talked to policymakers about the risks of synthetic biology and how to incorporate this into policy. And also about which social issues should be at the top of the synthetic biology agenda. And of course they talked with businesses about the applications they want to see developed. The chair group also worked with NEMO Science Museum and the Rathenau Instituut, and had extensive discussions with civil society organisations on the implications. In a pilot project 350 people were followed for two years, and it became clear that many people are not opposed to synthetic biology as such, but do have questions. For example, some support medical applications but do not want synthetic biology to be used in food.

Unexpected collaboration emerged too: at an art festival in Wageningen artists let their imagination roam freely on the possibilities or dangers of synthetic biology. Martins dos Santos: ‘We need that imagination so that others, including researchers, can dream.’

‘The dialogue is not just us teaching others what synthetic biology is,’ says Martins dos Santos. ‘We really want to hear about others’ needs. It mustn’t become a one-sided conversation with scientists saying everything’s great. People won’t buy that.’ Martins dos Santos wants to explain what the possibilities and limitations are, and then ask people what they want to do.

Society’s mistrust of genetic modification, and techniques such as CRISPR-Cas, is a consequence of the way science has traditionally gone about its work, thinks Martins dos Santos. ‘Now we want to do things differently. We engage with society so we don’t repeat the GMO experience. In Wageningen we are strong in collaboration and connection, and we have a built-in social science perspective too.’

Photo: Vitor Martins Dos Santos, Louise O. Fresco and Mies Loogman (the artist of the installation) at the installation of bacterial "superpowers" & genetic gaming at the event Syncity in 2017.