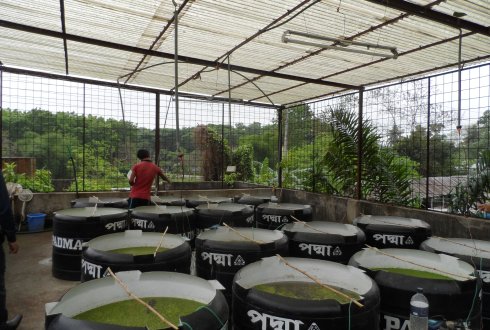 The insecticide imidacloprid (a neonicotinoid) is widely used in the tropics as a pesticide to protect harvests, and Bangladesh is no exception. Bangladeshi Doctoral candidate Kizar Sumon of the Aquatic Ecology and Water Quality Management research group at Wageningen University investigated the effects of imidacloprid on the sub-tropical freshwater ecosystem in the country. His findings are clear but raise more questions than they answer.

In the Western world, imidacloprid is generating a lot of backlash because it has been proven to have harmful effects on the environment by posing risks to bees and other insects such as mayflies. Until now, no research had been done into the effects of imidacloprid on aquatic organisms in tropical and sub-tropical zones. Kizar Sumon carried out his study using “microcosms”, systems in which the freshwater ecosystem is mimicked. “Take the pond in the back garden, for example,” says Professor Paul van den Brink of Wageningen University, who supervised Sumon’s research. “Because it is easy to set up systems of this kind, we can easily replicate our experiments and determine the impact of imidacloprid at the ecosystem level in a reliable way.”

To Van den Brink’s great surprise, Sumon’s study revealed that in Bangladesh, imidacloprid is hazardous to water organisms at much lower concentrations than in temperate zones. In other words, the product seems to be considerably more toxic in Bangladesh than in the Netherlands. “Because I was unable to come up with an explanation for this, Sumon repeated the test – this time not in a microcosm with multiple species but in a separate test with only those species that appeared to be extremely sensitive the first time. But once again we found that mayflies and copepods in particular became immobilised at concentrations that were 300 times lower than in temperate zones. So it would seem that the maximum permissible values in Europe are far too high for Bangladesh.”

The researchers have no idea why there should be such a difference in sensitivity. There are several variables that could play a role. The composition of the ecosystem in Bangladesh is different from that in the Netherlands, but repeating the tests using single species produced the same result. Van den Brink carried out his tests in the Netherlands at around 18°C, while the tests in Bangladesh were carried out at 28°C. Could the climate play a role?

Paul van den Brink: “I would not like to hazard a guess as to why this is the case. The fact remains that the study shows that we have been underestimating the ecological risks of imidacloprid in Bangladesh. We don’t know whether this difference also exists in other tropical or sub-tropical zones and for other neonicotinoids or other insecticides. As the use of pesticides in the tropics and sub-tropics is much less well regulated than in most countries in temperate zones, we can assume that the use of imidacloprid poses a much greater environmental risk in tropical and sub-tropical zones than it does in Europe.”