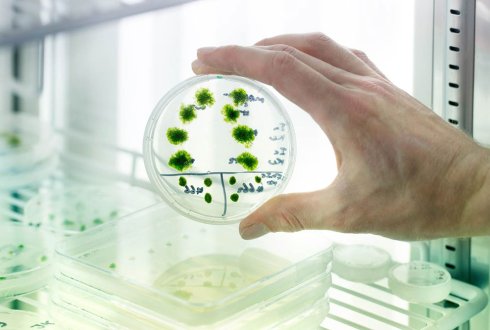 The Cell Biology chair group of Wageningen University & Research recently set up a research line using mosses in order to unravel biological processes in plants at a faster pace. This has now resulted in a scientific publication. Thanks to the research into Physcomitrella patens, we now know more about the formation of new cell walls during cell division.

Mosses are ‘lower plants’: plants that do not disseminate via seeds. In addition, they are often somewhat less complex. Nonetheless many important biological processes present in mosses are almost 100% identical to those of ‘normal’ plants. This is due to the fact that fundamental cellular processes were developed before evolution led to seed plants. New knowledge of mosses therefore teaches us a great deal about the plants we cultivate for food and the production of sustainable raw materials for industry.

According to Jeroen de Keijzer, doctoral candidate in cell biological processes at Wageningen University & Research, mosses such as Physcomitrella patens have major benefits over normal plants. De Keijzer: “For example, moss allows us to look into living cells in great detail under the microscope. In addition, moss DNA is easily modified. Even compared to new DNA technologies such as CRISPR-Cas used on normal plants, DNA modification is far simpler in mosses.”

De Keijzer is lead author of a publication in Current Biology which describes a process that is crucial to the division of plant cells. When a plant cell divides, a new segment of cell wall must be constructed to form two new cells. Elongated tubules made from protein building blocks, the microtubules, play a vital role in this process. The microtubules initially ensure that duplicated genetic material is divided neatly over two cell halves to form two identical cell nuclei.

Thereafter the microtubules remain present to coordinate the construction of a new cell wall in between the nuclei. The microtubules are divided in two sets that spatially overlap. De Keijzer: “We have shown that this overlap becomes increasingly smaller at the end of cell division, and that the overlap is in the exact spot where a new cell wall grows. When we ensure that the overlap does not become smaller, the resulting cell wall is thick and poorly organised.

“The importance of the overlapping microtubules is also visible on the outside as Physcomitrella patens plants with an extended overlaps hardly grow at all. We have therefore demonstrated that the shrinking of the microtubule overlap is crucial to the formation of a properly functioning cell wall.”

For his research into the process of cell wall formation, de Keijzer switched off two genes that make the overlap between the microtubules smaller. “This is simpler in mosses than in normal plants,” explains De Keijzer. “It is possible to build in new DNA in mosses without the use of, for example, bacteria that manipulate plant DNA. For genome editing, one simply brings moss into contact with the DNA which you wish to introduce into the moss genome. The DNA machinery of the moss ensures that the presented DNA is integrated into its own DNA at the correct location. We had to remove two genes using a so-called ‘knock out’ approach. This means we performed this action twice.”

Wageningen University & Research has research facilities with advanced microscopes. De Keijzer and his colleagues used a confocal spinning disk laser microscope for this project, which can look into living cells if they are not situated too deeply inside the tissue. Because mosses only have very few cell layers, they are very suitable for microscopy.

With two extra genome editing steps, de Keijzer introduced the DNA for two different fluorescent proteins into the moss plants: one to make the overlap of the microtubules visible, the other to do the same for the membrane structures used in cell wall construction. In the Physcomitrella patens plants where the overlap of the microtubules did not become smaller during cell division, the strip of new membrane used as the basis for the new cell wall was wider. This image is consistent with the cell wall photos which de Keijzer made with an electron microscope. As well as being thicker, the structure of the walls was also much more chaotic. For example, hardly any plasmodesmata – the channels with which cells normally ‘communicate’ through the cell walls – were present in the thickened cell wall.

Which microscope can look into living cells?