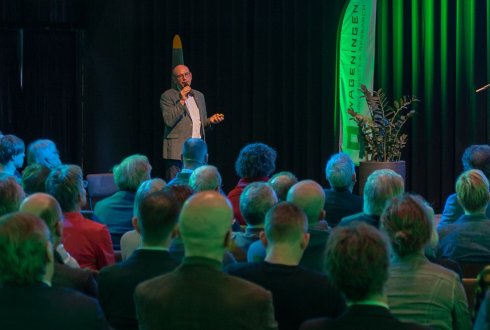 As well as leading the National Reference Laboratory for antibiotic resistance in animals, as a researcher at WBVR and professor at the Faculty of Veterinary Medicine, Dik was closely involved in establishing the Netherlands Veterinary Medicines Institute (SDa). Dik was also instrumental in highlighting the links to public health and the environment, developing collaborative relationships with various partner organisations in those fields.

Speakers at the farewell symposium for Dik Mevius on 31 January 2019 reflected on various milestones and publications on antibiotic resistance in animals and the environment. They also celebrated Dik’s personal touch and his passion, drive and intellect.

“The RIVM Jenner medal was presented to Dik for the many years he has devoted to controlling antibiotic resistance in the veterinary sector, working closely with RIVM. As a founder of the One Health policy in antibiotic resistance he made a tangible contribution to the national policy that RIVM depends on in its daily work advising on and combating resistant micro-organisms,” said van Dissel.

To mark his retirement, Dik Mevius was also awarded the J.G. van Bekkum prize, presented by Ludo Hellebrekers, director of Wageningen Bioveterinary Research. The prize was inaugurated at the farewell for former director J.G. van Bekkum in 1982. “This prize, a medal of honour made by the artist R. Killaars, is awarded to researchers at our organisation for their scientific achievements. Dik didn’t just add to our scientific knowledge; he also took the institute to a higher level and raised its profile,” said Hellebrekers.

Christianne Bruschke, CVO at the Ministry of Agriculture, Nature and Food Quality, said: “Dik has been very valuable to the Ministry, and he is highly respected internationally too. The Netherlands is regarded around the world as a leader in combating antibiotic resistance. Dik played an important part in that."

His international colleagues confirmed this in the following video, voicing their appreciation for his work and their professional partnerships.

Now that he has retired, Dik will be focusing on spending time with his family but he will also remain involved with research into antibiotic resistance through his supervision of eight PhD candidates.