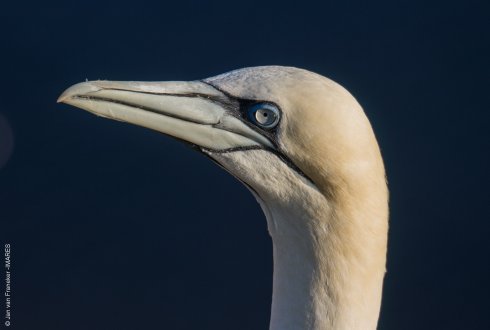 Northern Gannets started breeding on the German island Helgoland about 25 years ago. In 1991 the first breeding record ended tragically because the chick died due to entanglement of one of its legs in plastic rubbish in the nest. Nowadays victims of entanglement have become a common sight. That has resulted in the somewhat dubious title of ‘Bird of the year 2016’ in Germany.

Gannets build their nests on steep cliff faces. Originally they used seaweed to construct the nest, but gradually much of that has been replaced by synthetic nets, ropes and fibres picked up by the birds from the sea. The threadlike materials regularly entangle to a fixed knot around the bill, hampering flight and foraging of the animals which eventually die.

In the Helgoland colony, nowadays holding about 700 breeding pairs, birds annually die on the nest. Plastic nest construction materials are visible in about 90% of the nests. In 2014, at least 7 chicks and 5 adult Gannets died on the nest. More become entangled, but some can be set free.

Additionally in 2014, no less than 25 Guillemots became deadly entangled while flying to, or from, their cliff ledges. This is the more frustrating because Guillemots themselves do not use materials, but breed on bare rock. The dead birds hanging from the cliffs provide a dramatic view, and have triggered the title of ‘Seabird of the Year 2016’, fully described in an article in the German ornithological journal ‘Seevögel’.