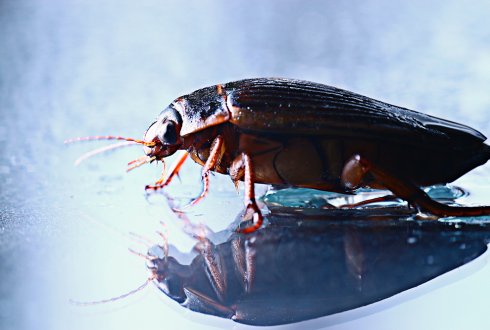 Study suggests that many species may play essentially the same role.
One of biology’s long-standing puzzles is how so many similar species can co-exist in nature. Do they really all fulfill a different role? Massive data on beetles now provide strong evidence for the idea that evolution can drive species into groups of look-a-likes that are functionally similar, according to a study by an international consortium of scientists led by Wageningen University.

While it is clear that species fulfill many different roles in ecosystems, it has also been suggested that numerous species might actually share the same function in a near neutral way. So far, however, it was unclear whether such functional redundancy really exists. The new study addresses this question using extensive data on the world’s 4168 species of diving beetles. It shows that across the globe these animals have evolved towards a small number of regularly-spaced body sizes, and that locally co-existing species are either very similar in size or differ by at least 35%. Surprisingly, intermediate size differences (10-20%) are rare. As body-size reflects functional aspects such as the food that these generalist predators can eat, these beetles thus form relatively distinct groups of functional look-a-likes. The striking global regularity of these patterns support the idea that a self-organizing process drives such species-rich groups to self-organize evolutionary into clusters.

“This finding has important implications for how we look at the risks of losing species”, says Marten Scheffer of Wageningen University and lead author on the paper. “Our work suggests that evolution is a generator not only of functional complementarity but also of functional redundancy. However, such redundancy does not mean that these species are not needed for the functioning of nature”. Scheffer stresses that while functional complementarity promotes the magnitude of ecosystem processes, redundancy promotes resilience of such ecosystem processes through the insurance effect of biodiversity. This insurance effect is due to the fact that species that are near-neutral when it comes to their functional role (e.g. their niche in terms of the food they eat), will typically still differ in their response to various stressors. Such response diversity may include sensitivity to specific parasites and diseases. As a result the resilience of a functional role should be expected to increase with the number of species in a near-neutral group.

“It is also important to note that such resilience from functional redundancy will be much rarer in larger animals, simply because species richness decreases with body size in the animal kingdom,” Scheffer says. “It is therefore no surprise that especially the loss of large species can give rise to substantial functional change in ecosystems. While redundancy may be the rule in smaller creatures, the functional uniqueness of larger ones could imply that they are often the Achilles heel for ecological functioning.”