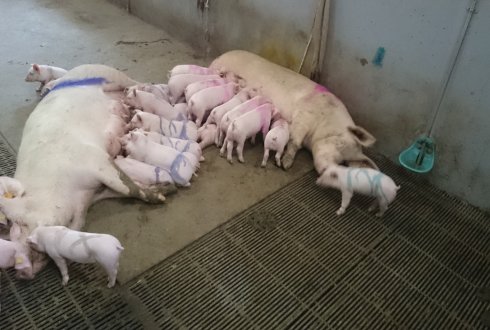 According to research carried out at the Dutch Swine Innovation Centre (VIC Sterksel), gradual weaning at the age of 9 weeks seems to be a good strategy to prevent the post weaning growth check, and to improve the behaviour of piglets and growing-finishing pigs. The development of piglets raised in a multi-suckling system was studied with abrupt weaning at an age of 4 weeks, and gradual weaning with intermittent suckling at an age of 9 weeks. The research commissioned by the Ministry of Economic Affairs was conducted by Wageningen University & Research.

Weaning in a group farrowing system

The group farrowing system consisted of two identical units with each five sows and their litters, and an adjacent intermittent suckling (IS) area to which the piglets had no access. From day 28 to 35 after farrowing five sows were separated into the IS area for 10 hours daily. During this period the sows had contact with a boar in the IS area to stimulate lactational oestrus and ovulation. From day 35 to 63 after farrowing the sows were able to voluntarily separate themselves from the piglets by moving into the IS area. The piglets that were weaned abruptly at 4 weeks age (A4) stayed in a group of 35 piglets in an enriched pen until day 63. At 9 weeks of age, the piglets from both treatments were relocated to a finishing unit, where they were housed in enriched pens in a group of maximum 35 pigs per treatment.

At relocation to the finishing unit the IS9 finishing pigs showed no post weaning growth check. Daily gain from day 63 to 68 was comparable in A4 and IS9 finishing pigs. However, during the finishing period the IS9 pigs showed less oral manipulative behaviour and belly nosing than the A4 pigs. This indicates less stress in the IS9 pigs as a result of weaning. These differences in behaviour also indicate that even in the long term the effects of abrupt weaning at 4 weeks and gradual weaning at 9 weeks of age remain visible.

The Dutch report with a summary in English is free to download.
The translated title reads: ‘Group housing for lactating sows: development of pigs raised in a multi-suckling system and weaned abruptly at an age of 4 weeks or gradually at an age of 9 weeks’.