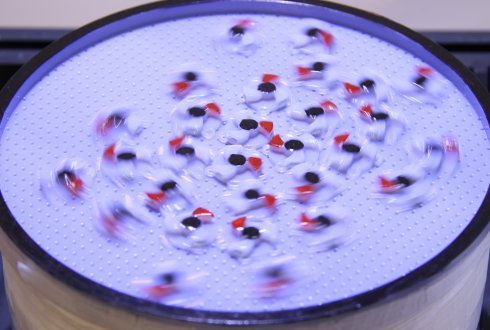 Many fish species swim in schools and birds fly in flocks. Such collective behaviour must arise from the interactions between the animals. How it works was largely unclear. Now, two Wageningen-researchers provide important insight into the mechanism behind this behaviour. Marcel Workamp and colleagues developed a model system in which they show experimentally that swarming behaviour is mainly governed by friction.

The model system that PhD-student Marcel Workamp and Joshua Dijksman from Wageningen University & Research developed with colleagues at North Carolina State University (Raleigh, US), is highly inspired by the arcade game ‘air hockey’. By continuously blowing air through little holes in the table, the puck in air hockey (the bird) floats on the table without experiencing friction. To propel the puck, the researchers added ventilation channels to the pucks, such that the air coming from the air table drives each puck to rotate in the same direction. In the model system, this direction was counter clockwise.

This simple addition already leads to extraordinary collective behaviour. Dijksman and colleagues use a circular table to which they add increasing amounts of pucks that rotate counter clockwise individually. Using image analysis, they tracked the position of each puck accurately.

As it turns out, if there are only a few pucks, they mostly collide with the outer wall. This leads to an overall motion of the pucks, which is clockwise. As more particles are added, a remarkable transitions occurs: the collective motion of the pucks reverses direction. They all move in the counter clockwise direction.

To further enhance the friction between the pucks, the research team added small ‘ears’ to the pucks using 3D-printing. This way they were able to enhance the collective behaviour. By adding the ears, the amount of particles necessary to achieve the reversal of the direction of motion decreases significantly by adding the ears. Without these friction-enhancing ears, more pucks were required to reverse the overall direction of motion.

Valid for birds, fish and gasses

The observations demonstrate that individual particles in the model, birds in a flock or fish in a school, can display swarming behaviour solely based on friction between the particles, without ‘seeing’ each other. Remarkably, the active particles also conform to laws that hold for passive, molecular gas particles in a cloud of gas, in which the particles, driven by temperature, also display collective behaviour.

The model system of Dijksman thus shows that collective behaviour can be achieved using few ingredients. Therefore, the research is not only relevant for understanding swarming behaviour in animals, but also for the development of new materials in which the activity of individual particles could lead to new material properties.

(Figure 2. Overview photo of the experiments with rotating pucks.)